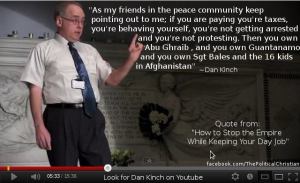 The way people remember me from my performance at Judson in March 2012. Pic courtesy of Robert Chan, text is mine, poster put together by The Political Christian.

So I was kinda/sorta invited to crash the Figment event tomorrow at Governor’s Island in New York. I’m doing a long version of my one-man show HOW TO STOP THE EMPIRE WHILE KEEPING YOUR DAY JOB. If you’ve seen me on YouTube, this will have new detail on another activity that will bring the Empire to a halt–Occupying Juries. And (since it’s a goal of mine to always keep the show fresh), I’m trying to think what ‘Jerry’ would have to say about the data-mining and e-mail/cell-phone surveillance. If anything, a Conspiracy Theorist like Jerry would not be surprised–cynicism is a valid response to being lied to constantly.  If you aren’t paranoid, you aren’t paying attention. I saw it on a T-shirt. Anyway, today will be rehearsal and practice and a bit of rewriting.

So–the plan is to perform twice: once around 1 and once around 4.  The play will take about 35 minutes out of your life tops. I don’t know where I’ll stake out, but the play was written so that it can be performed anywhere. One caveat, though: If the weather is as nasty as I suspect it will be, I ain’t doing the show in a poncho.  Watch this space for location.

PS: if it’s raining and/or you don’t feel like schlepping out to Governor’s Island, you could invite me over to your venue. I perform for travel expenses plus pizza and decent beer. here’s my card. 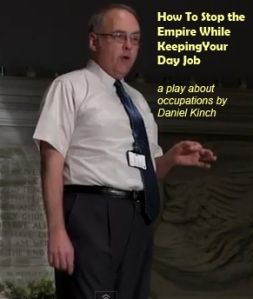 How to Stop the Empire–a play about occupations