A Good Day 2 Pie now on Video at Youtube! 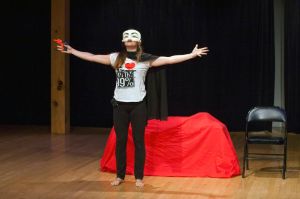 Sunday! Kathleen performed at Brooklyn Arts Exchange on Sunday for the camera! We have proof.

For those of you who haven’t been following this thread, I have this funny little play called A GOOD DAY 2 PIE. I first wrote it back in the 1990’s when an anarchist from the Biotic Baking Brigade staged a Pie attack on the CEO of Monsanto to protest GMO food and Monsanto’s bio-piracy practices in places like India. Lo and behold, who knew Monsanto would still be getting away with these practices nearly fifteen years later?

As ‘Vandana’, Kathleen explains why you don’t want to eat gmo soybeans.

This is a video version of the play that has been shortened for time purposes. The video was taken by Robert Chin, who has been recording Occupy Wall Street protests for much of the last few years.

Let us know what you think!!!

← Don’t know much about your metadata?
A Good Day 2 Pie–video version uploaded →