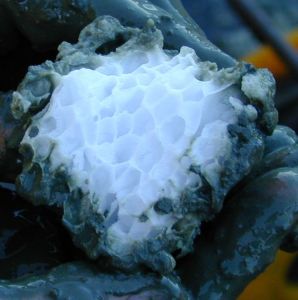 Methane hydrate/clathrate–this is the methane at the bottom of the Arctic that threatens to melt and cause runaway global warming. Is this the substance that will provide ‘100 years of natural gas‘?

About a month ago I used my ‘politics’ segment of my radio segment on Sex and Politics to talk to Marlo Lewis, a frequent go-to expert on climate matters for Fox News. Marlo Lewis is with the Competitive Enterprise Institute, and while we mistakenly identified him as a ‘climate change denier’, that isn’t exactly true.  His contention (and the opinion held by most people in the CEI organization) is that Climate change is happening. However, it is NOT anywhere as bad as people in the IPCC and UN Environmental Programme say it is, and it is not caused by humans (therefore any attempt by governments to limit carbon emissions or use of fossil fuels is misguided and counter-productive).You can hear our interview here.

While I’m linking to the interview, I’m not necessarily pleased at how it turned out. Lots of yelling and talking over people. There is a cognitive dissonance factor at work here. If you’re Guy McPherson or many of the other predictors of near term human extinction, your assessment of the people who run the IPCC (for example) is that they are hopelessly conservative in their outlook. The IPCC has missed several important milestones on climate due to the politicized nature of its process–simply put, nobody in the IPCC wants to be ‘alarmist’ regardless of what the data says. The data involving climate are fed through a panel of scientists, who present consensus on what they believe the likely outcomes will be based on the models. At THAT POINT, the vetted information is handed over to t he politicians, who decide what information needs to be released. If they issue a final report and  miss important news, so be it. They don’t want to be ‘alarmists’. But to people attending this year’s ICCC (the International Conference on Climate Change’, a forum for denialists like  Senator James Inhofe), the IPCC is hopelessly leftist.

What ended up happening in our interview is that Mr. Lewis quoted one set of experts, I quoted another, and we didn’t get much done. Which, more than a few people have argued, is part of the goal of those fighting against government regulation of greenhouse gasses. If a group of people are arguing for draconian measures (higher fuel prices, restrictions on burning coal, etc.) in order to combat what they argue is an existential threat, the best way to derail those measures is to argue that the threat is not existential and isn’t much of a threat.

Anyway, the argument I was set to make with Marlo Lewis on that fateful Friday is simple.  Even if you don’t believe in near-term human extinction caused by climate change (and there’s plenty of evidence on the distinct possibility that we’re headed there in a decade or so), there’s compelling evidence we’re looking at Peak Oil. As I’ve explained before on this blog, Peak Oil doesn’t mean the world is running out of oil and natural gas, but it DOES mean the world is running out of CHEAP oil and natural gas (Coal is also at peak–the grade of coal coming out of the ground these days is much less energy dense than the anthracite we used to get. It also burns a lot less cleanly). Did I mention peak uranium? And uranium refinement  (throwing tons of pulverized uranium through a huge centrifuge in order to get a few pounds of fissionable fuel) is completely dependent on cheap oil to get the raw ore chopped out of the rock and transported across thousands of miles of land and sea.

But as I researched, I realized that CEI (and thus Marlo Lewis) doesn’t accept Peak oil, either. Manhattan Institute fellow Mark Mills argues that the quantity of raw fuel matters less to energy security than our ability (both technological and political) to extract the fuel. In his 2005 book (co-authored by Peter Huber) The Bottomless Well, they postulate for an unlimited energy future–a position that dove-tails nicely with the CEI’s goal of ‘affordable energy’.  But Mark Mills is not a geologist–his expertise is in IT subjects. A typical Manhattan Institute article about the ‘potential’ energy from Mexico finds fault with the inefficiencies of PEMEX, the Mexican state-owned oil company. But the extraction rates (and declines in production) currently being experienced by PEMEX in Cantarell are largely due to the problem of efficiency. In the past two or three decades, oil companies have gotten much better at getting oil out of oilfields. But as ASPO founder Colin Campbell has pointed out, this is exacerbating the problem–it allows for faster extraction rates, but when the yield starts to decline, it declines at a much faster rate–perhaps 15-20% a year.

The US has had an uptick in oil and natural gas production over the past few years, which is contrary to the predictions of M King Hubbert. But this increase is not in ‘conventional’ oil, which has been in decline since the 1970’s. It is all due to the ‘unconventional’ means such as fracking and shale. The MSM, desperate for a happy story to report on the energy front, has been breathlessly announcing that the US is now producing more oil than Saudi Arabia. But that isn’t due to big increases in US production (though production of ‘unconventional’ oil and natural gas has temporarily reversed the Hubbert Slope). It has a lot to do with declining production in Saudi Arabia. And we’re never going to be an oil exporting country. The people at Post Carbon Institute estimate that we’ll reach a peak of unconventional oil within a decade–factor in the damage done to the environment by fracking and other means, and we will be stuck with dirty water and toxic forests long after we’ve burned up whatever oil or natural gas we get.

Which brings us back to denialism and the climate. My investigation into talking points prior to my discussion/interview with Marlo Lewis lead me to the conclusion that there is no way to really discuss some of these issues with anyone from Competitive Enterprise Institute or some of the other organizations that push market based solutions or denial science.  When push comes to shove, the climate catastrophe / peak oil assertions carry with them the logic of an elementary school science class. We have a finite planet, with non-renewable resources and no ‘other’ place to put our waste and debris. The evidence continues to pile up that we are facing critical near-term shortages not only in potable water and in energy but in critical metals needed to keep industrial civilization going. We are in severe population overshoot, perhaps by six billion or so people; all of those people aspire to the American lifestyle of high energy use and consumption that’s helping to kill the planet now.  Nothing would make me happier than finding out that I’m wrong on all this and the CEI folks are right. But I think there’s a lot of false hope and optimism being spread by the leaders who don’t plan to tell us that this is happening, that we’re on the cusp of planetary extinction.