A Podcast for your cousin Joey

February 20, 2015 · by Brooklyn Culture Jammers · in Uncategorized · Leave a comment 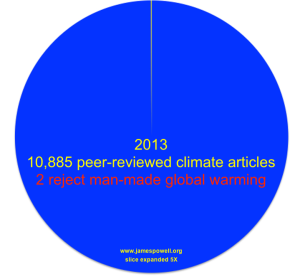 Dr. Powell’s pie chart on 2013 total peer-reviewed papers on climate change vs papers that reject human involvement in said change. From his site.

My funny little show on Sex and Politics today (2/19/2015) is worth a listen, especially if you’re like me and you keep getting involved in discussions about climate change and scientific debate with people who watch a lot of Fox News. I spoke to James Lawrence Powell, a geochemist and retired professor who served on both President Reagan and President HW Bush’s National Science Boards. He is the author of some 11 books including his latest, Four Revolutions in the Earth Sciences: from Heresy to Truth. His book looks at four theories that were initially rejected by science that subsequently gained acceptance after they stood up under rigorous investigation. 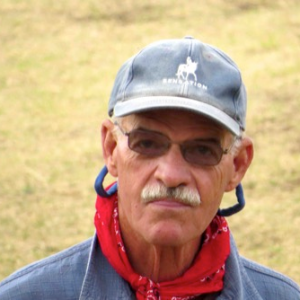 Though his specialty is not climate change/global warming per se (his PhD specialty has to do with the isotope counts of soil and debris found in core samples taken from earth in order to determine the age of the soil), he has been observing the ‘fight’ over climate change. And he decided to do something about it. Dr. Powell has logged every peer-reviewed climate article between 1991 and 2012. He wanted to find a count of peer-reviewed research papers that supported the theory of Anthropomorphic Climate Change vs. works that disagreed with it. Powell found that during the period in question, only 24 peer reviewed papers rejected global warming by humans, versus 13,950 that accepted it. His work recently found a wider audience when Bill Maher quoted him on ‘Real Time‘. He was also the first guest for Sex and Politics to have an Asteroid named after him–Asteroid 1987 SH7.

Now, regarding the crack about your cousin Joey (disclosure–I have zero cousins, Joey or otherwise), here’s what Powell gives you in terms of ammunition at the next family party vis the bromides about Al Gore and zero warming for 15 years and such. There were 24 articles/studies rejecting human-caused climate change that survived peer review between 1991 and 2012. The abstracts are on Dr. Powell’s website here. You’ll note that very few other scientists are citing these works in their own studies–that’s not a good sign. On the other side are 13,950. Remember, science without corroborating research isn’t worth much–it’s through such articles that science is advanced. And either the alleged 3% of scientists who dispute the science are terribly shy, or their work isn’t surviving peer review. Of course, there’s a third possibility–that the vaunted 3% who dispute a human hand in global warming are not in fact 3% of the science community. Assuming that the denialists are as prolific in their writing as the rest of the scientific community, there’s less than .5% of the papers that dispute the consensus.

As for the bromide about ‘global cooling concerns in 1975’ and ‘ocean death reports’ from the 1930’s, Powell points out that these predictions were not positions of the scientific community. Both were created by newspapers based on their reporting of what was a minority view in the science community.

I’m not wording all this very succinctly, so you’re better off listening to the good Doctor. Drop by Sex and Politics and get some talking points for the next family brouhaha.