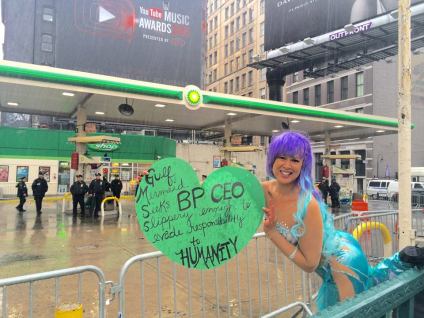 Marni Halasa, making the world unsafe for a BP station on the fifth anniversary of the Deepwater Horizon disaster.

So let’s say you’re planning to change the world–how do you get the media to cover you? Especially if your name isn’t ‘David Koch’ or even ‘Russell Brand’. Well, if you’re Marni Halasa, you work your butt off, and you make contacts and you promise the media they’ll get a nice picture or two  or a quote that will tie things together for readers/viewers.

And that’s what we talked about with Marni Halasa–Activist, dancer, figure skater and performance artist, she was profiled in the New York Times last year, and she draws media to demonstrations. She has degrees in law and journalism, but has gone forward with the concept of attracting media attention to demonstrations. She’ll be taking her message about getting outreach to the New Left Forum later in May, but you can hear some great ideas here. Give a listen and learn something!