The symbol for our predicament 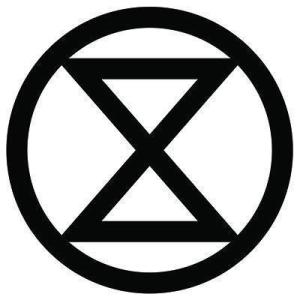 the symbol for near-term extinction. Put online by an acquaintance.

There have been many symbols and logos for climate change, global warming, and activism against environmental devastation. I’ve always been partial to the Earth FIRST! monkeywrench logo, personally. But how do you make a symbol that characterizes extinction? Some friends came up with this t-shirt design, which I hereby allow all of you to copy and place on any shirt you wear to protests: 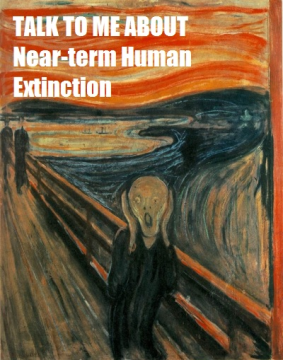 But the above circle with the hourglass has just been launched. And here’s the explanation for the symbols on the logo, from the website of the person putting it out there.

The symbol above represents extinction. The circle signifies the planet, while the hourglass inside serves as a warning that time is rapidly running out for many species. The world is currently undergoing a mass extinction event, and this symbol is intended to help raise awareness of the urgent need for change in order to address this crisis. Estimates are that somewhere between 30,000 and 140,000  species are becoming extinct every year in what scientists have named the Holocene, or Sixth Mass Extinction. This ongoing process of destruction is being caused by the impact of human activity. Within the next few decades approximately 50% of all species that now exist will have become extinct. Such a catastrophic loss of biodiversity is highly likely to cause widespread ecosystem collapse and consequently render the planet uninhabitable for humans.

In order to spread the message as widely as possible, please create this symbol in any location you feel able to. Thank you.