Where your job went and why it won’t come back

Not the only reason (there are problems with infinite economic growth on a finite planet), but some awareness might help…

A week or so ago I posted a fancy-pants essay by Kevin Hester, one of my buds in the NTHE movement (near term human extinction for the uninitiated). It used the language of the anti-capitalism movements, including the Occupy Wall Street folks. The thesis of Hester’s article was that capitalism is dying because the planet itself is dying. I’ve given it some thought and I felt I should widen the net, so to speak. Our current economic travails will not go away. They don’t need Clintonian incremental adjustments or micro-management. They need us to tip over all the tables a la that Biblical thing, and then they need us to face some realities. You could argue that the current crisis in the two-party electoral system is that the voters don’t want minor adjustments. They want to tip the tables over. 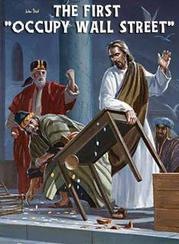 Well, that’s one way to change the narrative

I had written earlier this year about the world being in a structural depression. That hasn’t changed, and (if you believe the previous articles I cited), that cannot be changed. Even if we were not facing a catastrophic collapse of the climate, we’d be facing a crisis of capitalism. Why? Joe Brewer explains:

As eloquently described in the writings of Jeremy Rifkin and Paul Mason, the primary motivator for capitalists — to extract wealth from consumer exchange in the form of monetary gain — is crippled by the fact that the science of wealth extraction has become so advanced that every new wave brings diminishing returns. What is called “marginal cost” by economists, the difference between how much it costs to produce something and what people are willing or able to pay for it, is nearly zero now for everything we manufacture or provide as a service. This zero marginal cost trend is breaking capitalism down by the unexpected outcome of its own spectacular success.

Translated into simple language: All the real industries have run down. All we have now are scams.

Put it another way–it’s no accident that the champion money-makers of current-state capitalism are the hedge fund guys who’ve made their billions arbitraging nickels into dimes.  They build no great buildings, develop no breakthrough products, or change (in any substantial way) the means by which you live your life. But Finance has become the number one industry in the US  (and possibly the world). Why? Because the difference between investment and payoff stays high in a time of uncertainty for companies that operate in the real world. In other words, it is not good news for investors that Microsoft controls the business/personal productivity software market–that means Microsoft has no place to grow in that side of the business. Its individual products will still rake in large amounts of money, but that profit is already booked. Or look at General Motors. It’s been clear to anyone paying attention over the past three decades that GM’s core business has become car loans–GMAC (and the bank it spun off of it, Ally Bank) have been how GM meets its obligations. There was a great column on this by James Howard Kunstler recently on the meltdown of the car economy, and it contained this salient set of paragraphs:

For instance the automobile racket. Without a solid, solvent middle-class, you can’t sell cars. Americans are used to paying for cars on installment loans. If the middle class is so crippled by prior debt and the disappearance of good-paying jobs that they can’t qualify for car loans, well, the answer is to give them loans anyway, on terms that don’t really pencil out — such as 7-year loans at 0 percent interest for used cars (that will be worth next to nothing long before the loan expires).

This will go on until it can’t, which is what discontinuity is all about. The car companies and the banks (with help from government regulators and political cheerleaders) have created this work-around by treating “sub-prime” car loans the same way they treated sub-prime mortgages: they bundle them into larger packages of bonds called collateralized loan obligations. These, in turn, are sold mainly to big pension fund and insurance companies desperate for “yield” (higher interest) on “safe” investments that ostensibly preserve their principal. The “collateral” amounts to the revenue streams of payments that are sure to stop because the payers are by definition not credit-worthy, meaning it was baked in the cake that they would quit making payments — especially when they go “under water” owing ever more money for junkers that have lost all value.

It’s pretty much the same with Sears and their Discover card. Sears/K Mart can’t make money in retail, but they can earn money in issuing credit (at 21% interest). And a down economy with fewer buyers out there means more purchasers (many with bad credit) have to use credit cards. The interest rates hedge into the same area code as usury, so it’s a good thing most states have abolished Usury .laws. The Feds have only recently begun to log complaints about payday loan operations, which charge interest rates in the hundreds of percent. Meanwhile, banks are paying next to zero interest on the money they get from the Fed.

There’s also the possibility that in the future, Americans will relax their standards for auto safety and emissions standards in order to keep ‘Muricans on wheels so they can get to their phony baloney jobs in the Gig Economy. Most every American could afford a Nano Tata, India’s version of the Model T, for example–at RS 3.03 Lakh for a deluxe model, you’d be shelling out $4500 American for a ‘new’ car that will carry you to and from your subsistence-wage job at Walmart or Steak N Brew. But absent a federal decision to walk away from regulating what constitutes a ‘safe’ car, a venture capitalist is not going to put up a few hundred million investing in a plant for Nano’s to be built in Detroit. And he can’t count on beleaguered Walmart workers or ‘hospitality’ employees being able to swing $4500 for a ‘car’ out of pocket–unless banks lower THEIR lending standards.  Easier to hand your millions to a hedge fund guy. The hedge fund guy has hired huge numbers of math experts called (in industry lingo) ‘Quants’, whose job it is to find those rare nickel-to-dime anomalies and exploit them until somebody else figures them out. This is happening in a world where timing matters to the point where Wall Street trading computers all have to be in the same NY server farm (because nanoseconds count and a few extra feet of network cable travel will spell the difference between success and failure in the world of the million-dollar microsecond).

But all of this gets past the point I wanted to make–that the reason we won’t have things get better and the reason you’re going to have trouble keeping a job (or replacing a fulltime one) in coming years is twofold. First, outside the financial industry, very few businesses can make the ‘hurdle rate’ these days. That’s the rate of return on investment banks want to see before they’ll lend startup money or extend business loans. The Hurdle rate has been the reason American businesses don’t stay competitive. Companies need to make enough to pay the vigorish that the banks charge, and that frequently comes at the expense of innovation, modernization, and routine maintenance. That part has been true since the 1970’s, which were also the last time American middle-class incomes allowed families the luxury of needing only one breadwinner. The NEW problem with hurdle rate is that nobody sees an ability for companies outside of the finance world to make hurdle rates. You’ve got an innovative car company that can take on and beat GM and Ford at their own game? Great. But if it can’t meet the hurdle rate in three years, nobody will invest.

And that feeds into the other problem of the hurdle rate. Like most everything else in modern economic theory, hurdle rates and other tools of banking assume steady-state access to materials and a lack of disasters (natural and otherwise). One of the issues of the Peak Oil conundrum is that economists completely discounted lack of oil as an oncoming economic crisis. The assumption is that if the economic forecasts show (as they used to) that by 2025 we’d have have demand for 100 million barrels of oil everyday to keep the economy out of the ditch, the classical assumption was that by golly, the economy will find it. This is at a time when countries like Saudi Arabia were unable to increase their production and the 2005 Hirsch report indicated that most oil-producing countries had run out of the good stuff (aka light sweet crude that’s easy to refine). But now the hurdle rates are acting as enemies of economic growth. Your financial services office for sketchy home loans in, say, Southern Long Island has plenty of growth  potential, but you can’t get flood insurance now because insurance companies (who have their own hurdle rates to contend with) are no longer writing policies in your county because they predict you’ll be under water soon due to AGW. And why invest in companies financing new construction of middle-class housing when it’s clear the middle class will be a minority soon?

And THAT is why capitalism is dying. It isn’t dying because that Commie Bernie Sanders, an enemy of all that is good and pure, is leading in some election polls. It’s dying because even when the free stuff (land, minerals in third world countries, slave labor) has already been stolen and factored in, profits still can’t go high enough to satisfy the status quo because of the great can of whoop-ass we’ve unleashed in the climate. It’s dying because industrial civilization itself is driving the planet into sixth-great-extinction mode. I send this out with all my sympathies to my many friends and colleagues who are struggling with unemployment or underemployment. To paraphrase James Howard Kuntsler, Things cannot come back, and so they won’t.

And of course, no major party candidate (from president down to dog-catcher) will be this frank with you. The 535 individuals pictured at the top of this essay (the reason we can’t have nice things) are never going to be this honest. Even if you discount the NTHE’s dire predictions (predictions that can’t be made in the environmental assessments from the IPCC because they leave out the ‘feedback loops’ of climate catastrophe), the oil era will end one way or the other in coming years for all kinds of reasons– It’s kind of hard to get tar sands oil out of places that are on fire with flames that can’t be extinguished.

And your employment future? To paraphrase Rick of Casablanca fame, it doesn’t take much to see that the problems of us little people don’t amount to a hill of beans in this crazy world. Someday you’ll understand that.

Here’s looking at You, kid.