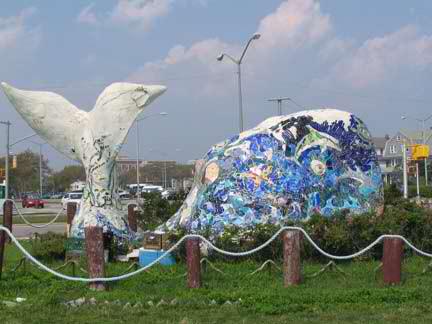 Whaleamena, the former mascot for the Central Park Zoo. it was relocated to Rockaway beach, but the Sandy Hurricane carried it off to sea.

Five years ago I wrote of the loss of the best illegal bike ride in New York City. It was a really long ride one could take along Belle Harbor, from Riis Park to the Nassau County line at Atlantic Beach Bridge. It was technically illegal because much of the ride passed along a boardwalk where cycling had been banned. And then the water came up during Sandy and most of the boardwalk was wiped out. I mourned the ride in an article titled “the best illegal bike ride in NYC” (and you can read it here).

I’m pleased to tell you that the city has finally rebuilt the Rockaway boardwalk (complete with bike lanes!) and a recent ride made me quite joyous. If you’re looking for a ride that won’t expose you to much traffic, this is it. If you’re doing the short version, you’ll have to wrassle your bike onto the A train, but it’s well worth your time. If you want to take a really long ride, this is the place. Make sure you have good tires and tire repair kit, and bring along goo packages or some other treat because there are sections of the boardwalk where there’s no shops or food. But it’s really far better than it was when I was first doing the ride back in 2006.

A Train to boardwalk

Take the A train to 116th Street Rockaway station

Take a left toward the boardwalk. You’ll pass one cross street (with a light).

At the cul-de-sac, ride up the ramp to the boardwalk (If you see ocean, but no boardwalk, you made a right instead of a left and are facing the bay. turn around).

Ride until you can’t ride any more on a concrete boardwalk. When you reach the end of the boardwalk, you are at the border between NYC and Nassau County. just turn back. Make a right at 116th, get back on the train. Go home. Rest. NOTE: you can ride another three blocks East and get on the Atlantic Beach bridge and ride to Nassau. If you cross the bridge and continue on the main drag, you will be in Long Beach in another two or three miles—there are excellent pizza places and restaurants along the drag). Round trip is about 13 miles. Going over the bridge to Long Beach and riding back can add an extra 10 miles.

One of the many stopping points on the Rockaway boardwalk. Food and beer and washrooms on your left, slightly shaded boardwalk on the right.

You can lengthen the ride in a number of ways besides straying into Long Beach. If you want to start from the Prospect Park area, just ride south on Bedford Avenue (it’s a pretty calm ride through several miles of single-family houses, and traffic tends to be light). At the end of Bedford, you turn left on Emmons Avenue (be careful–no bike lane on Emmons, and the drivers are not bike-aware). Ride east on Emmons until Emmons starts to merge into the Belt Parkway, then turn right on the last lane on Emmons (it’s a hotel on the right–there’s no street sign) and you’re on the Greenway bike path.

Continue on the bike lane. There’s a hairy climb in a narrow bike lane (the Belt Parkway bridge across the Gerritsen Inlet is under construction at present), but once you’re across that, you’ll be on flat ground for awhile as you turn south on Flatbush Avenue (cross at the crossing on the Greenway path) until you get to the Marine Parkway Bridge. There’s a bike lane on the Right side of the bridge (technically the west side of the bridge). When you get across the bridge, you’ll be facing Riis Park. It’s legal to ride on the boardwalk at Riis. Then you can cut back to Rockaway Beach Boulevard (which also has a lovely bike lane all the way to B 116 Street).

Once you get to B116 street, follow the above instructions to get from B116 to the end of the Rockaway Beach boardwalk.

At one point, I did the whole ride, starting from Prospect Park and going to a pizza joint in Long Beach and the distance was about 45 miles round trip. And if you are going to do this, you should drop by your local bike shop and try to pick up a free bike map of the five boroughs. You can also get a map online.

Have fun. Tell me how it goes.

← The Cassandra problem
‘How to Stop the Empire’ at the Tremors Art Show! →