A meme that’s gotten a workout over the past few days:

(NOTE: THIS has been identified as an image of John Daly, a professional golfer of some girth, with Trump’s head superimposed on it. It is NOT an image of the president, but since the meme has received widespread attention, I thought it newsworthy):

All related to the Trump Physical. There has been a lot of suspicion that Trump has been lying about his physical condition. Well earlier this week, Dr. Ronny Jackson gave an EXCELLENT rating for Trump’s physical condition, although there was talk that he needed to drop a few pounds.

Then the lying started.

First, per the physical, Trump’s weight was given as 239 pounds. I’ve spent the last decade and a half as a gym rat and my weight is not where I’d like it to be. But I’ve seen really big guys in my gym, people who look like Donald looks in the golfing picture. I guarantee you they were at least 275 pounds. I would guess that he’s closer to 300 than to 275. Absent somebody putting him on a scale in front of the world, we have to accept his word. So let’s leave that for the moment.

And then there’s the height thing: Trump is saying he’s 6’3″ tall. Really? This meme is now making the rounds:

And the 6’3″ bromide fell apart quickly–apparently there’s a Trump driver’s license or other ID online that shows his height at 6’2″ (something of an exaggeration, but not as much as 6’3″). So why would you lie about your height? Well, if you’re 6’2″ and your ‘official’ weight is 239, you are obese. If you’re 6’3″. you aren’t. Trump (or his handlers) decided they couldn’t have the O word next to his medical form.

And finally, the official diagnosis (the one repeated everywhere) was the president was in ‘excellent’ health. But Dr. Sanjay Gupta of CNN is saying that the paperwork from Dr. Jackson lead him to suspect that Trump has early stages of heart disease.

Gupta said dating back to 2009, Trump started to have “these tests that are actually looking for the presence of calcium in the blood vessels that lead to the heart.”

“Steadily, up until just this past week when he had it performed again, those numbers have gone up,” he said.

“When they get to a certain range … that means he has heart disease.”

More about this on this page in The Hill.

As my DW points out, we shouldn’t be discussing the Trump physical. We shouldn’t be going over the minutiae of Trump’s prevarications. We haven’t done this before. Presidents used to have unremarkable physicals and it was the third or fourth item on the news the one day a year when it happened. I remember the day LBJ yanked his shirt up to show reporters a surgical scar. He didn’t do it because he was crazy (he was crazy, but that wasn’t the reason). He wanted to make sure the world knew this wasn’t a coronary, that he had actually had gall bladder surgery and he was back. He was striving in his own odd way for transparency.

And this brings me back to Trump and knowing about him for the last 30 years as an unwilling spectator of his craziness. There was a SPY article back in the day, when someone who’d been dealing with him over a real estate deal characterized Donald Trump as the kind of guy who’d lie to you about the weather to see if you’d look out the window. Lying about your height and weight? little kids know that this is silly–that anybody can tell if you’re as tall or fat as you say you are. And Americans (I include myself here) have a weight problem. This is not about fat-shaming him. It’s about dealing with someone who is unable to tell the truth even when the truth is obvious. The old Nixon insult was ‘would you buy a used car from this man?’

And it’s also about hypocrisy. A man who has yet to formally apologize to the American people for insulting and belittling his predecessor as a non-American Muslim lives in the world’s biggest glass house. I’d like to pretend that this whole Presidential Physical drama was just another bullshit exercise in Trump seeing how far he could stretch things out.

But this guy still has the football with the launch codes sitting on his tv tray right next to his smartphone. He has life and death power over me that I’d rather not cede to someone who brazenly lies about obvious issues. 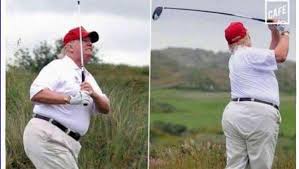 Donald Trump hits out of a sand trap on the 15th hole during a pro-am round of the AT&T National golf tournament at Congressional Country Club, Wednesday, June 27, 2012, in Bethesda, Md. (AP Photo/Patrick Semansky)