The Valve Turners, the Plowshares and other protesters

I wanted to share some news about protest with you that was a bit less… gruesome than the recent protest in Prospect Park.

The Valve Turners. From their website page, go there to see video and other information about their action to turn off the pipelines bringing oil through the US.

These are the Valve Turners, who’ve shut off oil pipelines and raised havoc with the companies pumping ‘unconventional oil’ (derived from the planet-wrecking practices of refining bitumen from shale and tar-sands). One of their members, Michael Foster, has been sentences to prison and could use friendly mail. Fellow valve turner Leonard posted contact info here. 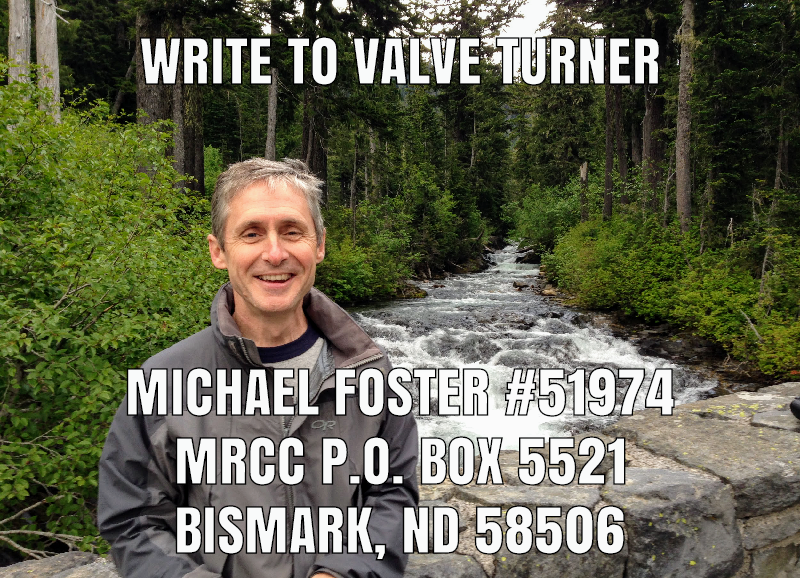 Not that the local folks in New York State working against fracking and pipelines aren’t also busy–they just put a thousand demonstrators on the street in Albany on Monday, the day after Earth Day, and over 50 were arrested. Here’s a pic courtesy of Roger Brennan of Protect Orange County.

And on the anti-nuclear, anti-warfare front, The Kings Bay Plowshares struck at a nuclear submarine base in Georgia a few weeks back. The action was timed to commemorate the assassination of Dr. Martin Luther King, Jr. The protesters entered the site and proceeded to spread human blood and paint graffiti denouncing the US nuclear arsenal.

Their support information is here–they’d appreciate letters and other forms of support.

Statement from the Kings Bay Plowshares

We come in peace on this sorrowful anniversary of the martyrdom of a great prophet, Reverend Dr. Martin Luther King, Jr.

Fifty years ago today, April 4, 1968, Dr. King was assassinated in Memphis, Tennessee as a reaction to his efforts to address “the giant triplets of racism, extreme materialism and militarism.”

We come to Kings Bay to answer the call of the prophet Isaiah (2:4) to “beat swords into plowshares” by disarming the world’s deadliest nuclear weapon, the Trident submarine.

We repent of the sin of white supremacy that oppresses and takes the lives of people of color here in the United States and throughout the world. We resist militarism that has employed deadly violence to enforce global domination. We believe reparations are required for stolen land, labor and lives.

Dr. King said, “The greatest purveyor of violence in the world (today) is my own government.” This remains true in the midst of our endless war on terror. The United States has embraced a permanent war economy.

“Peace through strength” is a dangerous lie in a world that includes weapons of mass destruction on hair-trigger alert. The weapons from one Trident have the capacity to end life as we know it on planet Earth.

Nuclear weapons kill every day through our mining, production, testing, storage, and dumping, primarily on Indigenous Native land. This weapons system is a cocked gun being held to the head of the planet.

As white Catholics, we take responsibility to atone for the horrific crimes stemming from our complicity with “the triplets.” Only then can we begin to restore right relationships. We seek to bring about a world free of nuclear weapons, racism and economic exploitation.

We plead to our Church to withdraw its complicity in violence and war. We cannot simultaneously pray and hope for peace while we bless weapons and condone war making.

Pope Francis says abolition of weapons of mass destruction is the only way to save God’s creation from destruction.

Clarifying the teachings of our Church, Pope Francis said, “The threat of their use as well as their very possession is to be firmly condemned … weapons of mass destruction, especially nuclear weapons, create nothing but a false sense of security. They cannot constitute the basis for peaceful coexistence between members of the human family, which must rather be inspired by an ethics of solidarity.”

Nuclear weapons eviscerate the rule of law, enforce white supremacy, perpetuate endless war and environmental destruction and ensure impunity for all manner of crimes against humanity. Dr. King said, “The ultimate logic of racism is genocide.” We say, “The ultimate logic of Trident is omnicide.” A just and peaceful world is possible when we join prayers with action. Swords into Plowshares!

If you cannot find it in yourself to personally ‘stop the empire’, support the people who are willing to.

← A Protest in Prospect Park
Our energy predicament →