What a sucky, shitty week.

many yuks at Kavanaugh’s  media tour statement that he was a virgin throughout high school and college. An entertaining bit of mendacity, but it doesn’t pass the smell test.

Everyone has been so transfixed by the battle over Trump’s SCOTUS pick, Brett Kavanaugh, that we’ve ignored my favorite existential crisis.

(Understand–there are reasons you should be concerned about Brett Kavanaugh becoming a Supreme Court Justice, including this one, but Kavanaugh’s ascension to the nation’s highest court does not constitute an existential crisis. Please don’t yell at me for letting Kavanaugh off easy– I know he’s a dirtbag and stands accused as an individual who has engaged in sexual assault on a number of victims willing to now step forward. If you need some cheering up, review this scene from GIRL WITH A DRAGON TATTOO where the young woman exacts revenge on her foster parent for raping her. Imagine the face is that of a doughy prep school drunk being interviewed by the Democrats. Feel better? good ).

Lost in all of the 24/7 coverage of the Court has been a breathtaking development on the climate change/global warming/ near term human extinction-we’re-fucked front. 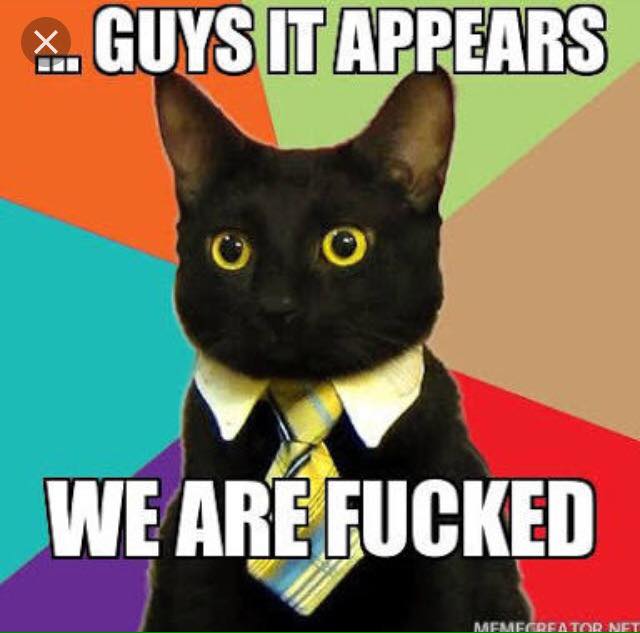 My favorite meme for NTHE, adopted by my friend Kevin Hester as well.

This appeared in a Washington Post Article on Thursday: Last month, deep in a 500-page environmental impact statement, the Trump administration made a startling assumption: On its current course, the planet will warm a disastrous seven degrees by the end of this century…A rise of seven degrees Fahrenheit, or about four degrees Celsius, compared with preindustrial levels would be catastrophic…Parts of Manhattan and Miami would be underwater without costly coastal defenses. Extreme heat waves would routinely smother large parts of the globe…But the administration did not offer this dire forecast… as part of an argument to combat climate change. Just the opposite: The analysis assumes the planet’s fate is already sealed.

In other word, the Trumpies are admitting that we’ve gone past the point of no return on climate. The money quote:

“The amazing thing they’re saying is human activities are going to lead to this rise of carbon dioxide that is disastrous for the environment and society. And then they’re saying they’re not going to do anything about it,” said Michael MacCracken, who served as a senior scientist at the U.S. Global Change Research Program from 1993 to 2002.

The full article lives behind the WaPo paywall–check it out. I’d disagree with their time scales (they’re saying a temperature increase of 7 F by 2100, when most of the people I follow are talking about heating hitting extinction-level temperatures by 2030 AT BEST, with runaway warming leading to over 4 C of increase in the next decade. Those numbers would put us past the point where we can grow food or survive out of doors in Wet Bulb environment areas.

In short, the Trump administration says human-driven climate change is happening and it’s too late to stop it. This should be the end of all denialist and ‘skeptic’ arguments against human causation of global warming. But (like most of the scientists willing to admit we’re on the way to extinction). Trump’s administration has pushed off the end date. All the bad stuff will wait til New Year’s Eve 2099 and when the ball drops, so will the humans. And the Trumpies don’t say WHAT WILL HAPPEN when things go out of control in 2099. The ‘Extinction’ word is not used.

Still–if you’re involved in conversations about NTHE, you now have a rhetorical weapon. If even the Republican acolytes for the current administration are admitting there’s nothing that can be done, what argument do the deniers have?