November 29, 2012 · by Brooklyn Culture Jammers · in Uncategorized · Leave a comment

I went back to Emmons Avenue two weeks after my last visit.  It looks like they have power, but most businesses still look closed. The cars I suspected were abandoned last time are looking a bit more forlorn now–in many cases, someone has written GEICO or STATE FARM on the glass, followed by a claim or policy number. In many cases, the plates had been removed from the car. It’s not clear if these were abandoned, or just waiting for the tow truck from the insurance co. I suspect the rest of the country will be dealing with ‘submarines’ (the industry nickname for cars that have been reconditioned after being in floods) for several years.  there were abandoned cars several blocks into Bedford Avenue.

And then there’s the Greenway path. 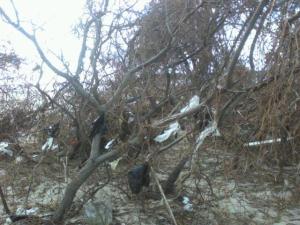 There are easily a thousand ripped plastic bags festooning the trees in the quarter mile from Emmons to Plumb beach. They flutter, they tangle, they are going to have to be taken down by hand. One by One. And I’m reminded of a Glen Beck rant about recycling grocery bags and how he deliberately asks for extra bags because he doesn’t like environmentalists. Well, Glen–those bags are going to be up there for decades unless someone takes them down. Wanna pitch in?

← tonight on WBCR
Random musings for a Friday →