Police and the ‘canary in the coal mine’ 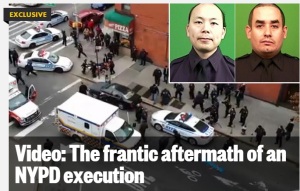 (12/21) Let it be clear from the outset that my sympathy this morning lies with the families of Wenjian Liu and Rafael Ramos, the two NYPD police officers killed execution style in Bedford Stuyvesant yesterday. One was a newlywed, the other was a husband and father. Nobody needs or wants this. The killer has saddled two families with an indelible connection of holidays and tragic death.

That said, there’s a blogger out there who has posted a provocative article on the subject. Robert Steele is a veteran of the CIA (Clandestine Services) and was the Reform Party’s candidate for President in 2012. He has just put forward an interesting essay on the topic of police shootings. Entitled ‘Killing Cops–The Canary Dies Too’, he cuts to the chase regarding the slayings: The death of these two officers is the equivalent of the canary in the coal mine dying. They have died because the USA is on the verge of a revolution. Apart from concentrated wealth, loss of faith in government, and tens of millions of unemployed college graduates, we have an unemployment rate closer to 22.4% (see ShadowStats), with 22 veterans committing suicide every single day.

(note to fans–see, I’m not the only person who follows ShadowStats!)

In his thesis, Steele developed a chart of items which would be issues in a pre-revolutionary society that is about to tip–public beliefs in the competence of the perceived leadership of society, risk, etc. He then outlined where these items would have to change in order for an at-large society to believe that the status quo is not acceptable. So under ‘Competence’ as viewed through a political/legal prism, a society that perceives its status quo government as ‘Weak or inefficient, (with) either too much or too little bureaucracy‘ is coming toward a turning point when the people decide the status quo must be replaced by any means available. The chart is here, with Steele having filled in each of the variables. The ones in lavender are already true— these are areas which indicate dissatisfaction significant enough to push society toward revolution. There’s a lot of lavender in the chart. Steele states that he used the chart as part of a course he taught at the Marine Corps Staff and Command college during the 1990’s. His thesis is here.

I’m here to save you some reading. Steele believes we are on the cusp of a revolution. The police, as representatives of the status quo, are vulnerable. They’re in the cross hairs of all sorts of folks–everyone from the tea party militia types to the gansta gang banger types represented by Ismaaiyl Brinsley. Remember, the white men with guns have been egged on by hate radio. There were militia guys pointing weapons at federal agents in defense of Cliven Bundy–anybody get arrested? And a prediction of revolution (with police in the front lines) fits neatly into both right and left-wing memes. The late Howard Zinn ended his People’s History of the United States with a chapter entitled THE COMING REVOLT OF THE GUARDS. He recounted the story of the Attica Prison guards–the archetypes of the middle class–who were slaughtered in the NY State military assault on the prison strike. In Zinn’s view, there was going to come a time when middle class people wouldn’t be willing to protect the elites against revolt. Will police here put down their riot gear as has happened in places like Thailand?

It’s interesting to me that NYers’ distrust of the police is surprising to anyone. In 1998, I was called for jury duty in Brooklyn. I was part of a panel of 75 potential jurors for a murder case that involved drugs (how, we weren’t told), and the evidence strongly depended on police officer testimony. This was during the height of ‘Giuliani Time‘. We filled out a questionnaire and then the attorneys and judge put us all through the voir dire process. Long story short–virtually everyone in the pool had stories about unpleasantness (to put it mildly) with the police to the point where they would not trust police testimony. There were all sorts of variations on the theme: a woman whose nephew was ‘tuned up’ after the cops didn’t find drugs; a man who was dragged out of his apartment naked and beaten because a police informant had mistakenly given out his address for a cocaine bust. It went on and on and in the end, there were only two from the pool who were kept (and one was an attorney, certain to be out shortly). It was the time after the rape of Abner Louima and before the fusillade of shots that killed Amadou Diallo. There was a change in the air, exemplified by the Seattle protests against the WTO.

Police (especially in NYC) got a free hand in many respects. The Bloomberg Administration managed to hide police misconduct fairly well (thanks to hizhonor’s media contacts)–it wasn’t until recently that someone did the math and found that the city has paid out nearly half a BILLION dollars in settlements for police misconduct between 2009 and 2014. It’s also not clear whether that amount includes the $18 M payout for illegal arrests during the 2004 RNC convention.

And now (as Steele pointed out), we’re at a real unemployment rate of over one in five. We have an economy that looks about to go into the toilet again (Japan has had two quarters of negative growth–that’s called a recession, though the business community has been pretty quiet about it). The crash of oil prices may take down the economy at large–as much as 25% of the junk bond market is in unconventional oil funds (capital for shale, tight oil, tar sands, etc.). Those bonds won’t pay at oil prices of $65.

This may seem to be a digression from the subject of police being targets for popular anger. However–anybody who’s studied the subject will tell you that crime rates go up during economic hard times. And the police, acting as the vanguard of the 1%, are increasingly perceived as the enemy, even by those who would support them in different times. One of the memes that has surfaced after the murder of the two NYPD officers is about Eric Frein, a right-wing survivalist who allegedly assassinated a Pennsylvania state police officer earlier this year. The animus toward police is not just racial.

A meme about Eric Frein relevant to the outrage about police shootings in NYC.

If we are in fact headed into another recession, we’re in far worse shape than we were in 2009. The Fed has already thrown several trillion out the window propping up the banks, and the end result of that is the banks are engaging in the same sort of overleveraged mayhem that crashed the economy before. Congress just passed an Omnibus Spending Bill that puts US Taxpayers on the hook for some $303 TRILLION in derivatives. And if there’s a huge downturn, beware–there’s a GOP legislative majority coming in to both the House and Senate, and they’re not going to do much on stimulus if past behavior is any indication. You have several big municipalities in bankruptcy already. Things will get ugly. Police officers are finding themselves in the unfortunate position of defending the status quo, and people are in a foul mood. Furthermore, the folks in charge are probably not so interested in paying their salaries or pensions. I would not like to be a police officer right now.

(Thanks to Jerry Ashton for publicizing Robert David Steele’s writing on this).