93 million out of the workforce 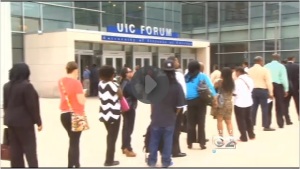 There has been much jubilation over the latest unemployment report, which shows that the economy had grown by 223,000 jobs last month. Market analysts and economists were watching the April numbers closely, after an anemic 126,000 jobs added in March had to be ‘adjusted’ down to 85,000 jobs. Remember that anything below 150,000 new jobs a month means the economy is not creating enough jobs to address population growth.

While April’s numbers are good news, they don’t tell the real story. Neither does the 5.4 unemployment rate. It doesn’t match my perception or the perception of many of my friends and colleagues, either–the people I know who’ve been searching are still searching, and friends are more concerned for their own jobs than they were a year ago. I’m reluctant to share details, but when people with decades of experience are being thrown under the bus for no good reason, one has to think that the economy is still a few million individual stories that contradict the ‘big picture’. Put it another way–if the economy is mended, why are there so many empty store-fronts? These are retail spaces in good locations that have been empty for long periods, and they aren’t being turned around. Not all of them are Radio Shacks. But in fact, nationwide retail (and many chain restaurants) is on the ropes–some 6,000 national retail establishments are set to close this year, on top of losses already seen. Why should an ambitious mom and pop try to open a store in a business climate where Abercrombie & Fitch can’t hack it? Paul Craig Roberts has broken out a complete analysis of the jobs gained and lost last month and it’s worth a few minutes of your time.

Jim Clifton, the CEO of Gallup (the opinion polling people) wrote about unemployment back in February. This is part of that article that was excerpted by Pam Martens, a financial writer I’ve cited before, and her co-author Russ Martens. Clifton is clearly cheesed off at the way the government games what counts as ’employment’ (boldface added by moi).

“None of them will tell you this: If you, a family member or anyone is unemployed and has subsequently given up on finding a job — if you are so hopelessly out of work that you’ve stopped looking over the past four weeks — the Department of Labor doesn’t count you as unemployed…Right now, as many as 30 million Americans are either out of work or severely underemployed…

“There’s another reason why the official rate is misleading. Say you’re an out-of-work engineer or healthcare worker or construction worker or retail manager: If you perform a minimum of one hour of work in a week and are paid at least $20 — maybe someone pays you to mow their lawn — you’re not officially counted as unemployed in the much-reported 5.6%. Few Americans know this.

“Yet another figure of importance that doesn’t get much press: those working part time but wanting full-time work. If you have a degree in chemistry or math and are working 10 hours part time because it is all you can find — in other words, you are severely underemployed — the government doesn’t count you in the 5.6%. Few Americans know this.”

By the way, Clifton is monitoring related trends–in January, he noted that more US businesses are failing than are starting up, a phenomenon not seen in 35 years. And as confirmation of Clifton’s analysis of a sputtering economy, GDP for the first quarter of the year grew at .2%. Not 2 percent (which is anemic, but acceptable) but a tenth of that. The quarter before that had a not-at-all robust 2.6% growth rate, a step down from the anticipated 3.3.

Meanwhile, one number did grow, and has been growing since the 2008 crash–the number of adults of working age out of the workforce. We hit a record last month according to this article in Zerohedge–a record 93 million employment aged adults are out of the workforce. The last time our adult participation rate was this low was when women were still staying at home as homemakers and one adult male’s salary could keep the family in Beef-A Roni and an annual vacation.

This is one of the reasons I’m not interested in what the Democrats want to say about the economy. The economy still stinks for millions of people, and high (but uncounted) unemployment is one of the things that’s keeping a lid on salary demands. But there’s no advantage for the Dems to talk about the economy because the GOP will go nuts (I don’t think Obama deserves all the blame for this–we needed about $1.5 trillion in pure stimulus in 2009 in order to offset the $22 Trillion lost by the banksters, and there was no way the Repubs would go along with that). And the GOP has no desire to do anything that would improve the economy–their supply side strategies and tax cut policies are what got us into this mess. That said, I think the Democrats are playing with fire by talking about the ‘great’ economy we’ve got. It is a house of cards.

One more point–I’ve revisited this issue several times in the past. Fourteen months ago, I wrote about a protest staged by the remnants of Occupy Wall Street over unemployment. You can click on this link to find the data, most of which is unchanged. But there has been almost no mention of the unemployment problem in the months since. I don’t know of one recent protest staged by ANYBODY over the issue. It’s making me and my friends extremely cynical to be experiencing so much stress over underemployment and pending job loss and then not seeing this reality reflected in media or the internet.  Even Huffington Post doesn’t appear to be covering unemployment stories anymore.

93 million people becoming 93 million voters is more than enough to throw a presidential election in this country–Obama only got 59.9 million in 2012. But in order to get those voters, you have to actually address unemployment. If we end up in a Jeb Bush Vs. Hillary campaign, neither will have any interest in doing so. Hilary won’t because she won’t draw attention to Obama’s legacy, Jeb Bush won’t because he’d be reminding people of just how badly W crashed the economy. Would a Sanders campaign that tirelessly beat the drum on unemployment succeed in getting the 93 million to turn off the Internet box and pull a lever? Stay tuned.