Photographer goes to JAIL in US 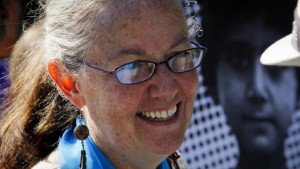 Your government is sending an Ithaca Grandmother to prison for six months for taking photographs of a demonstration at an Air National Guard base. The convicted party is Mary Anne Grady Flores, part of a family protest lineage dating back to the 1980’s when her father John Grady did prison time for a Plowshares protest*(details at bottom).

Why is she going to prison for taking photographs?

The government has latched onto a novel way of ginning up charges for protesters at the base, which houses facilities for our drone wars. They have taken out an order of protection for the base commander, Col Evans. The order of protection extends to photographs, and when Ms. Flores took photos of  eight protesters with the base in the background on Ash Wednesday, February 13, 2013, that was deemed to be violating the order. Onondaga County Court Judge Miller upheld the lower court conviction. Of note is that all eight Catholic drone resisters were acquitted because they went to uphold law, not break it. But in theory if their signs had mentioned Col. Evans, they probably would’ve run afoul of the law as well.

I might point out that the government is doing everything it can to both criminalize anti-drone protest and marginalize the people doing it. Brian Terrell served six months for attempting to deliver a petition to the commander at Whiteman AFB. And Anti-drone protesters in Syracuse were arrested and faced serious charges for a protest there a couple years ago, but the judge didn’t buy it. Meanwhile, someone in the group Voices for Creative Nonviolence explained the drones and the war crime embodied in their use. They’ve taken it down, but the Upstate Coalition to Ground the Drones & End the Wars wrote a similar indictment for Hancock and has put the indictment here.

Ms. Flores addressed the court about her actions back in February 2014. You might want to pull up the video of her address.

And here’s information about the trial from The Nuclear Resister, which includes her mailing address at jail. You could send her a letter of encouragement.

*John Grady’s plowshares action: PLOWSHARES NUMBER FOUR: November 14, 1982 – five days after the Trident Nein sentencing – John Grady, auto mechanic from Ithaca, New York; Ellen Grady, aide to an elderly woman and peace worker, also from Ithaca; Peter DeMott, of Plowshares Number Two; Jean Holladay, grandmother and nurse from Massachusetts; Roger Ludwig, a poet and musician involved in work with the poor in Washington, D.C.; Elmer Maas, of the Plowshares Eight; and Marcia Timmel, from the Dorothy Day Catholic Worker in Washington, D.C.; entered EB. Three boarded the Trident “USS Georgia” and hammered and poured blood on several missile hatches. Four others entered the south storage yard and poured blood and hammered on Trident components before being quickly apprehended. Like the Trident Nein, they underwent a jury trial and were denied a justification defense. They also were convicted of criminal mischief, conspiracy and criminal trespass. They received prison sentences ranging from two months to one year. from the Plowshares Chronology.