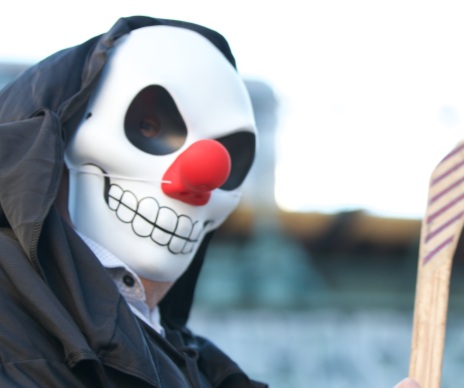 Death And Despair on the streets of New York.

Planet Hospice (a lighthearted exploration of the sixth stage of grief, gallows humor), a new one-person show about global warming and the threat of human extinction, will be presented at the United Solo Festival on November 6 at 2 PM.

Tickets will be available through TELECHARGE

Planet Hospice is a lecture/clown performance on climate and extinction given by a scientist named Dr. James Light. Doctor Light, who’s been cashiered from his cozy university job because his lectures upset his students, has been researching the tipping point for climate warming. He has been wrestling with the question of what people should do if in fact the human race is on a short path to extinction—if people are on the way to eternity’s trash compactor. Dr. Light presents his case while dressed in clown garb–And as a clown, he tells jokes. He makes balloon animals. He plays with puppets. He tells jokes about death and eternity and the Kardashians. But Dr. Light also talks about his own sense of loss. And he lays out a plan for what people might do if there’s no future (starting by being more generous and loving people). In his view, we are all in a condition of hospice and need to act on those things that are important, including the need to be with people we love.

The production is an outgrowth of the Brooklyn Culture Jam, an arts group started in 2012 in support of the Occupy Wall Street Movement. Play productions include HOW TO STOP THE EMPIRE WHILE KEEPING YOUR DAY JOB, a new play about the Occupy Wall Street movement, and A GOOD DAY 2 PIE, a play about genetically modified organisms in our food. The science of Planet Hospice is grounded in the work of a number of climate researchers and activists including Dr. Guy McPherson, Dr. Michael Mann, Dr. Natalia Shakova, Dr. James Hansen, Paul Beckwith and others. Playwright Daniel Kinch will be playing the role of Doctor Light. This is Mr. Kinch’s ninth one-person show on a variety of topics including nuclear weapons and protest. His plays have toured the US and Europe.

For more information about the issues surrounding global warming and the politics of climate change, visit our website at https://brooklynculturejammers.com/

UPDATE: Here’s where you need to go to buy a ticket!