Why Trump is winning 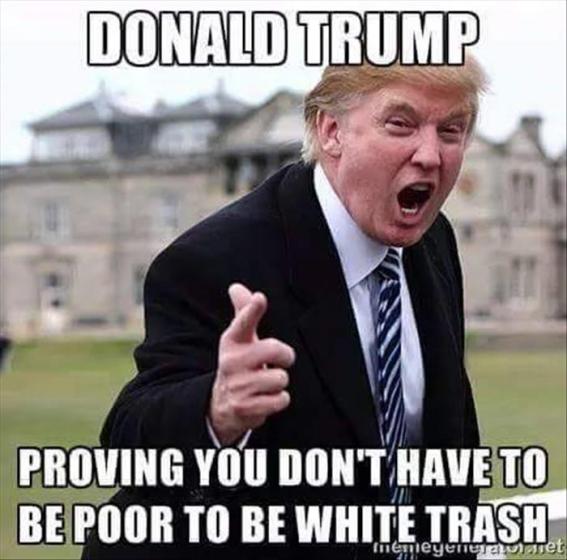 Not as funny now that he’s leading Clinton in polls, eh?

I’ve been working on a project of sorts lately. Undertaken by some progressive liberals I know, the impetus of the project is to find experts in a variety of fields who will assess what they think a Trump presidency will look like (in terms of damage to the US’ international prestige as well as economic and environmental destruction), and why voters should do everything they can do to stop him. ‘Everything they can do’ of course is looking more and more like pulling the lever for Hillary. Unless Bernie Sanders can pull a big rabbit out of his hat in terms of a decisive win in the California primary, Hillary looks like the Trump alternative come November. That’s not good news—poll after poll shows Hillary tied with OR BEHIND Trump ‘if the election were held today’, whereas Bernie Sanders has averaged 10 point margins against The Donald in a similar hypothetical matchup. Lawrence O’Donnell recently pointed out that Hillary Clinton has never been able to increase her advantages in elections. She comes in with a lead, and holds onto it as her opponent gets closer in numbers. In 2008, she never increased her lead over Obama, who fought for every delegate in every state, and by the end, Obama was beating her everywhere.

The other fly in the ointment is that the ‘experts’ I’m seeking for the above project aren’t condemning Trump alone. They’re frequently commenting on the status quo. A Black Lives Matter spokesperson isn’t going to mention Trump without acknowledging that the status quo was what lead the organization to be formed. That’s bad news for Clinton, who personifies the status quo–in many critical ways, she will be a minor adjustment of the policies of the current administration. In a rare knock at Clinton, the DailyKos posted an anti-Clinton article, pointing out that her campaign focus is about making incremental changes. The Kos article points this out as an issue of privilege–of the problem of having a candidate who’s never had to work for minimum wage. Hillary initially rejected a $15 an hour minimum wage, staking her claim on $12 instead: One obvious reason to try and make miles of progress is because not everyone has the privilege of waiting for incremental change. Take the minimum wage for example. The difference between a $12 an hour minimum wage and a $15 an hour minimum wage probably means a lot more to someone making less than $15 an hour.

That $3 hourly difference in the minimum wage amounts to a little more than $6,000 per year. You can buy a lot with $6,000 extra per year. However, if you’ve never worked a minimum wage job or had to raise a family on less than $15 an hour, then just how much this extra income means can be difficult to grasp. That’s the privilege that informs the Clinton campaign’s incremental approach to progress.

This is a country where currently (as I’ve pointed out) over 93 million working-age Americans are involuntarily out of the full-time workforce. Nobody in the GOP primary was addressing their pain except for Trump, who mixed in his xenophobia and racism with some real understanding of people’s pain that is tied to an economy still in a structural depression. Trump breezed past all challengers for the entirety of the primary race. And on the Democrats’ side, only Bernie was talking about the pain (and anger) that’s out there. He may squeak out a victory in California, but the DNC knives are out for the convention. You can even sense their narrative–Everything’s fine. Why take a chance on Bernie? And as I type this, the BLS reports this AM that the US created only 38,000 jobs last month (about 110,000 shy of what’s needed to keep pace with population growth) and yet the unemployment rate still fell to 4.7%. That unemployment rate ‘decline’ is not because people got jobs. It’s because people timed out of their UI and aren’t being properly counted.

And that’s why Trump is winning. That’s why he won the GOP primary, and that’s why he’ll win the general election against Clinton. It would have helped if, per David Cay Johnston, the media had reported properly on Trump’s many shady deals. And it could still go wrong for Trump if he is forced to release his tax returns and it becomes known that Trump has gamed the system and paid no income tax for over a decade. His supporters will forgive The Donald for racism and bullying, but their contempt for the status quo may make it difficult for them to look past this. Or maybe, as the New Yorker points out this week, it won’t matter. In a snarky article titled LOSERS FOR TRUMP posted this week, James Surowiecki points out that Trump’s voters feel great loss and nobody has taken their side in the post 2008 meltdown economy. Such voters might switch to a Bernie Sanders, but not to an establishment figure like Hillary. BTW, one other caveat. We just had an awful first-quarter, with growth at .5% (yes, five-tenths of a percent). There’s some anecdotal evidence that the only thing that contributed to growth was people buying healthcare before the IRS fines started ratcheting up. If the economy continues to lose ground, Hillary will be toast. She’s staked her race in part on the idea that she’s inheriting Obama’s legacy–if that legacy is an economic hiccup of major scale, she’s going to lose badly, and so will all the Democrats downticket from her.

Finally, I leave you with this. A few weeks ago, Dilbert creator Scott Adams boldly predicted a Trump landslide come November. He based this prediction on the way Trump has played the American electorate like the harp from hell. Adams has always had a keen eye for the BS corporate America feeds itself, and he sounds awfully prescient. And while I hope Trump’s campaign doesn’t pay off, it’s coming awfully close to the last reel before we see any hope of rescue from The Donald.