April 4, 2017 · by Brooklyn Culture Jammers · in Uncategorized · Leave a comment

This is a chart from Bits of Science, a page on science that brings forward scientific papers that have gone through peer review and breaks them out for a general audience. This chart left me a bit gobsmacked. 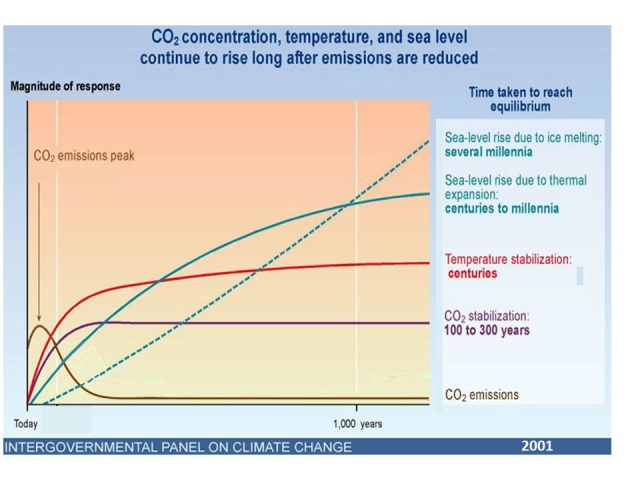 Chart from the IPCC from 2001. Note how slamming on the carbon dioxide brakes does not end the threat of climate disaster.

If you’re wondering what this means, it means that even if we managed to slam on the brakes on heating tomorrow, heating from what we’ve already done (in terms of carbon dioxide emissions, AGW, and other issues) would persist for hundreds or even thousands of years. So (looking at the Brown Line) carbon dioxide drops to zero TODAY. Temperature levels don’t stabilize for centuries. That makes sense in a way. We know that the last time carbon levels were over 400 PPM, sea levels were upwards of 25 meters higher (80+ feet for ‘Muricans)  and temperatures would be 2.5-3 C higher. We’re at 410 PPM right now, but it’s taking the planet’s temperature and sea level a long time to catch up.

The rest of their (copyrighted) article is here.

I already intuited that the GOP/Trump urge to ignore global warming data was a recognition that we’re past the point of no return. If climate warming means there’s mass die-off of humans on December 31, 2024, you’d best believe the Koch Brothers and other plutocrats want every last dime on the planet before Christmas.

Have a nice day.