A picture sticks in my mind–Angela Merkel 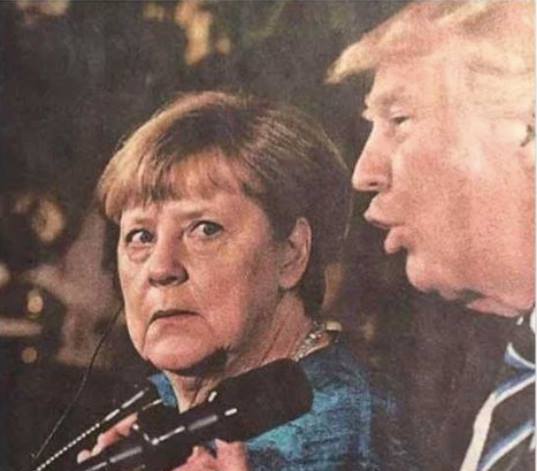 Donald Trump says something that is apropos of his usual. And Merkel Chancellor of Germany, the most powerful leader (man or woman) in Europe, reacts.

This is a couple weeks ago, but it occurred to me that it should still be part of our discourse.

The Donald’s meeting with German Chancellor Angela Merkel a few weeks ago was disastrous. And as badly as it went for what the media actually SAW, there were things behind the scenes that must have been worse. For one thing it was widely reported that Trump only half-jokingly presented Merkel with an ‘invoice’ for over $300 B for ‘defending’ Germany all these years. While both governments have subsequently denied it, Trump had also tweeted on the idea enough times that one has to wonder.

Or maybe Merkel’s sour face had to do with other plans that Herr Trumpf has for NATO. We are already well on the way to fighting a war in Syria. Turkish Troops rolled across the Syrian Border last fall, which means NATO is informally supporting aggressive action against Assad (Turkey is a member of NATO). The Russians have made the defense of Syria an issue. Trumpf doesn’t seem to be one to hold back. And Merkel might have been asking questions (and getting answers to them) that chilled her to the bone. Think of Trumpf’s reluctance to shake her hand.

I have never felt sorry for a political leader the way I felt for Merkel that day. The woman’s a PhD in Physics and is as smart as anyone in world politics–probably more than most, in fact. She had to have a private sit-down with a guy who uses a fourth-grader’s vocabulary, has trouble reading, and is starting to show signs of senile dementia, a man who also has his finger on the trigger for something like 7,000 nuclear warheads.This is also a man who repeatedly asked his generals why we don’t use our nuclear arsenal more often. There’s no way she could’ve gone up to the podium and said “we of the Nato Alliance wish to note that we need to speak to better leadership from the United States”. But dear God her tongue is probably still bloody from all the times she had to clench her teeth and bite it when he was talking.

I wonder what facial expression she had when she got news that we’d bombed Syria.

I leave you with this. Snarky but accurate. 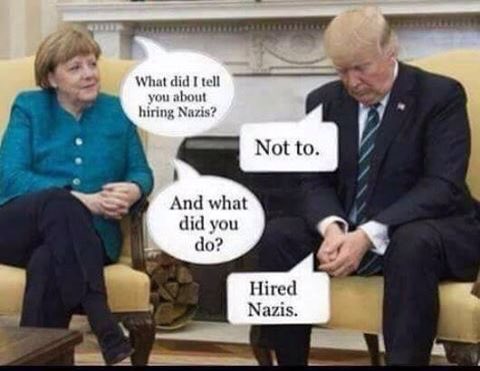 another fun meme from that day.