May 31, 2017 · by Brooklyn Culture Jammers · in climate disruption, near term human extinction, The Trump era · Leave a comment

Trump pulls out of the Paris COP 21 Accord.

The social media nets are a-twitter over the news (not confirmed) that Drumpf will pull the US out of the Paris Climate accords also known as COP21. No confirmation yet, but it seems a done deal. The Donald doesn’t believe in Climate Change/Global Warming, and it would be a bone to throw to his base, even though Paris didn’t require mandatory changes in CO2 output.

What Is NOT being talked about is in a sense far more ominous. Congress is cutting the funds to NASA that pay for the satellites keeping track of the loss of Arctic Ice. This was already begun last year, when Congress had put this in place. It was thought by the Dems that President Hillary would stop it from going forward. Uh, no. Here’s a relevant quote:

For all intents and purposes, Arctic scientists — and the world — could very soon be blind to the tumultuous changes happening in the Arctic until 2022 or 2023, with no viable international systems coming on board in time to completely fill in the coverage gap… “It is unfortunate and disturbing that right at the time we’re seeing sea ice cover in rapid transition, we’re in danger of losing some of our key capabilities to observe what’s happening and understand it,” says Mark Serreze, director of the National Snow and Ice Data Center.

There’s compelling evidence that we will lose Arctic Summer ice either this year or next. Once that happens, we’re in runaway warming–the ice will no longer mitigate the heating of the oceans, and the reflective ‘albedo effect’ brought about by the white ice will no longer cool the world’s sea water. Many things are predicted to happen as a result. None of them good.

I’ve been laying off regular posting here because the news is generally depressing and I’d rather not wallow in it. But there’s really nothing left to say. The only reason for Drumpf to shut off the satellite program at this point is to spare us from the moment we know the game is over. Maybe that’s what matters to Drumpf and friends.

*W.A.S.S.–We are So Screwed (thought I’d go with that rather than WASF, which is increasingly hitting my feed).

Here’s a late poster from the Arctic Sea Ice blog: 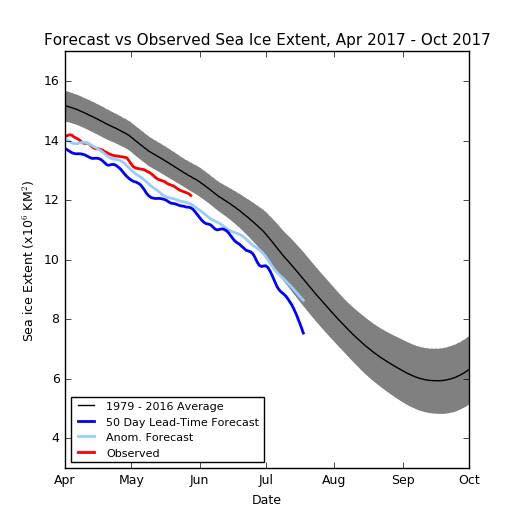 PS: A friend noted that Trump’s habit of tweeting after sunset may be exhibit A of what behaviorists call ‘Sundowning Syndrome’–when the sun goes down, many people in early stages of Dementia go into flights of fancy that they’re immune to during daylight. It includes anger, fury, physical attacks and demented rambling. More here.