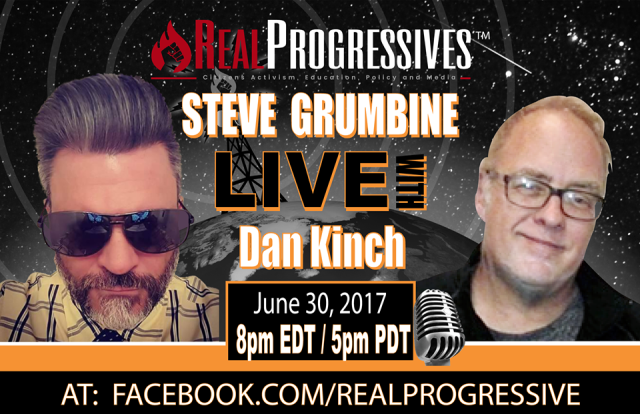 The poster from my talk with Steve Grumbine of Real Progressives on June 30. The topic? Extinction-level climate warming and the lack of interest of the left in talking about it. You can find the conversation here:

First up, I had a lovely conversation last week with Steven Grumbine, the person who organized last year’s March to Restore Democracy in DC. Steven’s a driving force in the group called Real Progressives, and he talks a lot about economics and deficits and also MMT (Modern Monetary Theory). But that wasn’t what we were talking about. We were talking about the Left and its distracted state. While I consider myself a leftist, the left hasn’t done a bang-up job on climate issues. First, there’s denial about our predicament of population overshoot–if you start talking about a big part of our problem being the fact that the planet can’t support seven and a half billion humans (never mind seven and a half billion humans who aspire to American living standards), anyone talking about this will be castigated by the uber-crazed conspiracy theorists who opine that population control is part of the secret David Rockefeller/Trilateralist plan to limit population for their own nefarious reasons. or it’s something else. It’s Chemtrails. It’s the Rothschilds. And when there’s talk about oil and the depletion of it (called ‘Peak Oil’, though even bringing THAT up will cause a fist fight), many self-described lefties will pop up with bromides about a ‘hemp economy’. Or fixing everything with electric cars and new light bulbs (which actually puts them on the same page as most of the Democratic party). But extinction? Climate change causing extinction? That’s crazy, dude!

So for whatever reason you can think of, protest over climate has been shunted to the side, and big protests like 2014’s PEOPLE’S CLIMATE MARCH didn’t want to broach the subject of human extinction at all. Yet there has never been more compelling evidence that we’re going off a cliff. And neither political party has begun to address this. The GOP is in epic denial that Anthropogenic Global warming is even happening. The Dems are only marginally better–the policies that were put forward by Hillary Clinton in 2016 were only marginally better on climate than nothing at all. Apparently, saying that climate change won’t affect us til 2100 is not crazy, but saying that we’re looking at extinction by 2026 at the latest is crazy.

Except, not so crazy. My FB friend Robin Westenra just brought this to my attention.  A poll by the Yale Program on Climate Change Communication found that 39 percent of adults polled recently thought that climate and global warming will lead to human extinction. There are other details on the blog (courtesy of environmental writer Robin Westenra), but you should check it out.  My point in bringing this up to you is that a significant number of ‘Muricans already know we’re staring at the Abyss. And I’d suggest that a significant number of that significant number ALREADY KNOW that the people in charge don’t plan to tell us.  We’ll figure it out on our own, hopefully before the whole system blows up. Meanwhile, the news keeps piling up on the desperate state of our predicament. Ocean physicist Peter Wadhams has said summer ice will be gone from the Arctic by 2020. That’s actually MORE optimistic than the US Naval Postgraduate College, which says it will be gone by next year at the latest. As for scientists, the ones I follow are onboard with those dire predictions as well. And more and more are making pronouncements that used to end people’s careers.

So (back to the Left) why isn’t this a thing? Is refusal to accept the likelihood of extinction due to global warming a marketing ploy? My sense is that this is at least part of the problem. Are organizations like Sierra Club, Audubon Society, NRDC and other donor-dependent groups going to use the E-Word?  Of COURSE not. Back in the 1970’s, the pro-Green groups started using cuddly imagery to get people on their donor lists.

So that leaves us. As readers of this space know, I’ve been touring this crazy play about climate change leading to near-term human extinction. It doesn’t surprise me to learn that a large proportion of people might believe what I believe–that we’re on the last reel of the movie that is human civilization. The question is, what do people want to do about it? I’ve come to the conclusion that people want something to DO even if  the experts are telling them there’s nothing they can do. The alternative is telling folks there’s things that could save us, when in fact, there’s none of those really left. In my groups, that’s called ‘Hopium’–spreading hope like a drug when no hope is justified.

But what if we walk a line–This is probably not going to work, but dammit, we’ve got to do SOMETHING!

There are maybe five or six technologies that would have saved us if we’d implemented them twenty or even ten years ago. Whatever we’re doing right now, what would it hurt to try them? Why not see if we can sequester the Methane or bury the extra carbon? Wouldn’t trying be worth something? If nothing else, having the world focused on putting out technology to save the planet might mean the sociopaths in charge of the warlike countries would have less focus on building more WMD. I postulated that sequestering the billions of tons of carbon dioxide now cooking us would cost us trillions of dollars a year. Okay, crazy. But surely if THAT is crazy, so is taking the trillion the Obama Administration committed to using to build a new generation of nuclear weapons. Even if you’re a believer in Steve Grumbine’s advocacy of MMT, wouldn’t focusing our best minds on SAVING the PLANET (regardless of what it costs) change our focus in a good way?

In closing, I’d like to remind you that I would love to talk to you about NTHE and hope and hopelessness. Really! It’ll be fun!