‘Biological Annihilation’ and other hopeful statements Guy McPherson’s National Geographic interview with Bill Nye from two years ago. He told Nye we had less than 15 years. Video here:

No, friends, you haven’t picked up a blog-post copy of the National Enquirer. I am the lowly reporter/performance artist, and I had watched a video this AM of  Guy McPherson’s latest thoughts. It’s here on YouTube, if you wish to peruse it. It’s blessedly short. And the prediction doesn’t give us much time either–the good Doctor doesn’t give us nearly enough time to assemble a noose or find something sharp. Here’s Guy’s page where you can look at the video.  Note the phrase ‘Biological Annihilation’.

No, the phrase ‘Biological Annihilation’ isn’t some headline involving aliens and their love child with Hillary Clinton. This isn’t some Weekly World News cover gone awry. It was in the title of a paper released in the Proceedings of the National Academy of Science in July. The title?

And you can find the paper here.

I know it’s been a busy year, but you’d think I would have seen notice of the publication. But there was so much bad news on the climate front in 2017 that it barely caused a ripple. After all, we had the infamous NY Magazine article on oncoming extinction (driven by non-attribution to Guy’s work, as I noted here). But human extinction is no longer a taboo subject–the fact that doomer researchers can no longer keep up with mainstream articles on the subject should be telling.

And yet–nothing is really changing in terms of response to climate collapse. As I predicted last November, Trump’s   administration is determined to put Pedal to the Metal on using oil and other fossil fuels and fighting renewables every step of the way. Kathleen Harnett White, Trump’s newly appointed senior adviser on environment, had an extremely rough confirmation hearing where she denied basic science. More about that here, and don’t miss the video. And the GOP has suspended funding on keeping our NASA satellites tasked to observe loss of Arctic Ice maintained. We know (or have reason to believe) that Arctic ice is going to disappear by 2020, but we’ll have no way to confirm this because we won’t have any satellites keeping track. Meanwhile, the scientists divulging the dark nature of our future are being personally attacked in some very scary ways.

And meanwhile, the articles predicting near term extinction keep coming. My friends in the ‘doomer cult’ group on FB (I say this sarcastically–we don’t have a membership list yet) are finding out that they’re no longer fringe thinkers. And my friends who are seeing the dawning of the bad news are angry, withdrawn and sad. Being Cassandra has not been fun. But maybe people will stop falling in love with the demi-god of moderation. We are in desperate times. We need to figure out how to carry out our exit as painlessly as possible. The only ‘good news’ from the PNAS article of July is it puts to rest any ideas there’s big dichotomy between the assertions of Dr. McPherson and those in the science community who’ve been AWOL up to now. 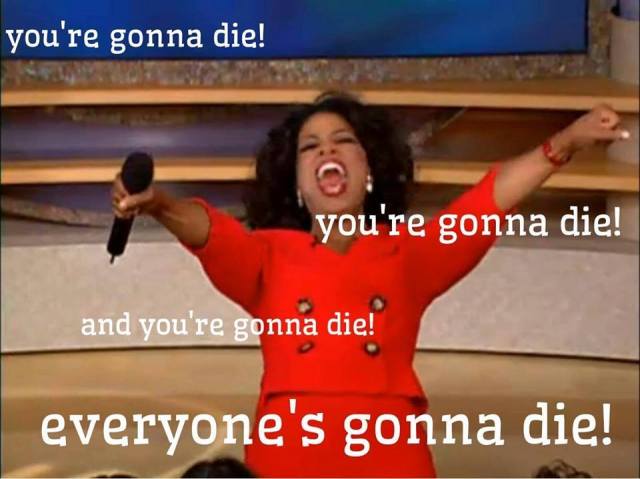 As a certain esteemed individual keeps reminding his readers, we all know we’ll die.

← New York, overbuilt and gentrified
We Are So Fucked and Sooner Than Previously Thought! →