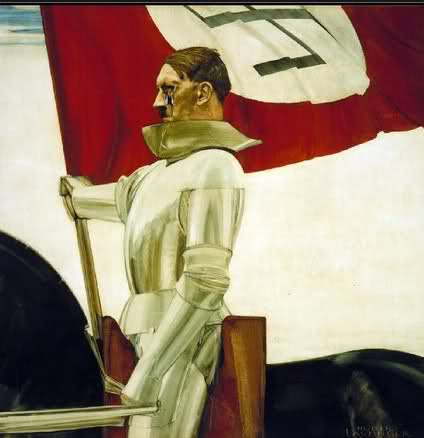 A Nazi Propaganda picture of some repute.

In April of 2015, I put up a post titled THE SEARCH FOR A MAN ON HORSEBACK. It discussed the fact that there was a yearning (identified by others) for someone to ride in, take command of the government and get rid of the ‘bad guys’, Constitution and law be damned. Little did I know that a few days later, ‘Murica would get one in the form of John Donald Trump, who went on past all predictions and became president. I have reported on him several times since April 2015, predicting with some certainty that he would struggle as President. Today, his former National Security adviser Michael Flynn was indicted on a single count of lying to the FBI and has pleaded guilty a few minutes ago. It is assumed that he is providing testimony against his former boss.

My understanding of the mechanics of the Special Prosecutor rules is that a prosecution of this sort will turn small fish and flip them for evidence against a central target. The ‘Resist’ Series helmed by Keith Olbermann, has been informative on the points of law that are at stake, and why Mueller is working his way up the chain of command. Don Junior and Kushner and a host of other Trump staffers may ultimately face the fall of a gavel, but they aren’t the purpose of this exercise. You can hear some explication of this on Keith Olbermann’s farewell video here.

But Olbermann also points out that the Trump faithful are going to react to this as an act of Martyrdom by The Donald, and the already-ugly politics of the post-2016 election are getting even more unpleasant. As I wrote in 2015, there is an element of ‘cornpone fascism’ (thanks to James Howard Kunstler for that phrase). breaking large in the US. In an Olbermann video from a few weeks back, Keith reported polling that showed, given the chance for a do-over, 91% of Trump voters would still pull the lever for him. That’s far better than Nixon’s support when Watergate broke into hearings toward impeachment. We may well be looking at a genuine revolution here. The GOP faithful (an oxymoron if there ever was one) are willing to vote for a pedophile instead of a Democrat. There’s no compromise here.

And I can’t close this out without noting that no president can change the laws of thermodynamics or countermand the likelihood of near term human extinction. Pence can’t, and neither can anyone the GOP puts in once Pence is indicted.  Bernie Sanders can’t, and neither could Hillary Clinton. I’d side on the left for a replacement, but the reality is that global heating past survivable habitat for humans is on its way. The only benefit people could accrue from dumping most of our current political infrastructure is that maybe the lying would cease.

← We Are So Fucked and Sooner Than Previously Thought!
How Far Over the Climate Precipice are we? →