The Flu that wasn’t

*Warning–many readers will decide this is off-the-wall paranoia of the foil-hat kind. I do not mention aliens and I don’t go off on chemtrail conspiracies. Read and think about your own personal experiences. Then combine that with the end story, seemingly unrelated, of the die-off of an obscure antelope native to North Asia. I’m just sayin’*.

My former supermarket, now MIA. It opened briefly as a ‘Purim Superstore’ for the Jewish holiday, then shut down again. Fortunately, I couldn’t keep food down anyway.

For the better part of three weeks last January, I was laid low with what I called the Flu. It certainly felt like something terminal–constant body aches, fever, sinus, headaches as severe as anything I’ve ever had, even an occasional dizzy spell. My DW also had it, and was similarly bedridden. Not much in the way of appetite (which is fortunate since my neighborhood now goes without a supermarket). My brand-new healthcare plan hadn’t kicked in yet, so I hadn’t gotten a flu shot. But local news was saying that whatever this was, it wasn’t responding to flu shots in the first place. And people who came down with similar symptoms were being told that whatever they had, it was not the flu. Meanwhile the death spiral went up–at one point nearly 45,000 were counted as dead from this flu that in many cases didn’t match THE flu.

So the malady I suffered through was pretty nasty. But was it the flu, or was it something else? Here’s a post from one of my ‘doomer’ groups, describing in detail what I was going through.

SYMPTOMS: There is a ‘flu’ going around which is not really a flu. The white coat docs are calling it flu simply because they have no other explanation. Symptoms vary from person to person both in duration and strength. Also according to gender. Often the first symptom is a vicious migraine – which has strange symptoms in and of itself: often little pain but severe pressure inside the skull and down the back of the neck causing strange almost out-of-body sensations, extreme sensitivity to sound and light. This can last 3 or 4 days and then there might be severe pain. A few days later comes the ‘cold/flu’ – your nose runs and runs and runs and you pee and pee and pee. The worst time is at night so no sleep. Then you seem to have a fever – your face becomes hot and flushed bright red, but your body remains cool. You sneeze and your throat … itches. No ‘sore throat’ or strep — it’s scratchy and can almost stop you breathing. You begin coughing. Plus sharp muscle pain.
This goes on for two weeks or more — you’re woozy, your ears are in agony, stuffed up and the tinnitus is off the charts. Eyes are full of goo. There are intermittent severe anxiety attacks, panic and emotional melt-downs. Then the nausea and sometimes throwing up and/or diarrhea hits. For women, expect the onset of a severe period. For guys — migraine and severe dizzy spells.
THIS IS NOT FLU — THIS SEEMS TO BE AN ON-GOING REACTION, PROBABLY ALLERGIC REACTION to whatever is going on in our atmosphere, and to the massive pollen output. MUCH OF THIS WHOLE REACTION IS IN RESPONSE TO FREQUENCY.

Anyway, I can vouch for the coughing and tinnitus and breathing difficulty. I didn’t have much digestive trouble, mostly because I didn’t have much to digest. But I really didn’t want to put food or water in my body, which made things worse.

And now for something completely different– a story of global-warming driven epidemic. 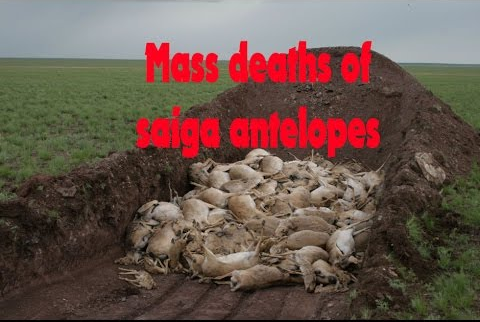 Cover page from a Youtube video on the sudden die-off of Saiga, an antelope native to Kazakhstan.

Above is one of a series of photographs of dead Saiga, an antelope common to Kazakhstan. Thousands of these endangered animals have been dying in mass mortality events (MME) recently. The pictures in the above video show meadows of tundra where the animals have dropped dead, sometimes within a few meters of one another. the Guardian’s article states: Dotted across the grassy plain, as far as the eye could see, were the corpses of thousands upon thousands of saiga antelopes. All appeared to have fallen where they were feeding…Some were mothers that had traveled to this remote wilderness for the annual calving season, while others were their offspring, just a few days old. Each had died in just a few hours from blood poisoning. In the 30C heat of a May day, the air around each of the rotting hulks was thick with flies.

The scientists, faced with tens of thousands of carcasses of what had been healthy animals, were stunned. After 32 postmortems, they concluded the culprit was the bacterium Pasteurella multocida, which they believe normally lives harmlessly in the tonsils of some, if not all, of the antelopes. In a research paper published in January in Science Advances, Kock and colleagues contrasted the 2015 MME with the two from the 1980s. They concluded that a rise in temperature to 37C and an increase in humidity above 80% in the previous few days had stimulated the bacteria to pass into the bloodstream where it caused haemorrhagic septicaemia, or blood poisoning.

An entire species nearly killed off because a temperature increase activated a formerly benign bacteria living in Saiga sinuses to spread into the bloodstream.

In fairness,  I should point out that the original poster traced the discussion of her ‘flu’ symptoms to geoengineering and/or chemtrails. There has been a subset of the activist community that has argued the case of  deliberate government spraying of toxins into the atmosphere.  I’m not a believer, though I say that with reservations–I was a follower of the work of Dr. Rosalie Bertell, a Canadian epidemiologist and expert on nuclear toxicity. She’d written about a number of non-nuclear American experiments over the years. One of the experiments was a ‘contrails’ (she didn’t use chemtrails) experiment where tens of millions of copper needles were fired into the upper atmosphere to determine what effects it would have on polar magnetism. Check out her book (linked above).

That said, The odds on coincidence versus stochasticity aren’t great. We have mass mortality events within hours of temperatures reaching past previous limits (the Saiga were experiencing temperatures above 37 C with 88% humidity, which aren’t common temperatures). And (as the Guardian points out), mass mortality events are becoming more and more common (there’s mention of the mass die-offs of starfish, unprecedented in the human epoch). Could our ‘flu’ problem be set off by passing some unseen milestone on climate that suddenly makes humans succumb to diseases that weren’t possible before we warmed 1.6 C above pre industrial baseline?

Looping the two stories together, what if our ‘flu’ was a response to some bacteria being awakened by our increasingly screwed-up climate? Two weeks ago, I was out on my bicycle in Brooklyn when temperatures exceeded all kinds of local records. As I write this today, we’re looking down the sights of another Nor’easter, with generally unpleasant cold weather ready to blast through for the third time this winter. Climate Change does not equal weather, but it does make bad storms worse because of the extra heat energy and water vapor it adds to the weather systems. James Hansen‘s book about future disaster was titled THE STORMS OF MY GRANDCHILDREN. To paraphrase James Hansen, what if global warming has re-awakened sickness of my great-grandparents?