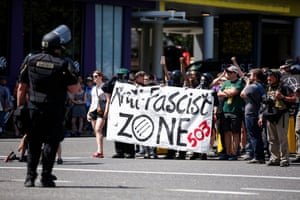 From the anti-fascist protests in Portland. Picture by Terray Sylvester for the Guardian.

New flash–for those not paying attention, there was a rally of rightwing groups in Portland, Oregon on Saturday. It was ostensibly in support of the Republican senate campaign of Joey Gibson. Gibson is not an avowed racist, but (like Trump) has stances that draw alt-right groups to support him. This article explains the issue:

Joey is a leader in which a wide coalition of people around him, from Alex Jones at InfoWars, to street fighting Proud Boys, have all put their stock in to. Gibson is an effective circus master under the big top of far-Right events across the West Coast, and best of all, he wears a mixed-race face – what better way to increase the opacity of what is going on behind the scenes. And like Trump, for Joey the uniting factor for both Patriot Prayer as well as his demonstrations as he told Reveal, is “hatred for the Left,” which more and more, is becoming a vision of the Right’s own creation.

Cut to Saturday’s scenario: there’s a big rally in support of a far-right candidate in one of the West Coast’s most avowedly liberal cities, and antifa groups vow to march against what Gibson’s followers stand for. So…fascist groups converge on Portland to celebrate white power and support a Republican senate candidate who is on the side of the provocateurs, including a brownshirt group notorious for its street fighting tactics. And heavily armed riot police respond by… attacking the counterprotesters.

Not that I’m surprised. Friends who took part in the anti-fascist response to Nazi and Klan protesters in Charlottesville, Virginia last year (and the journalists who covered the violence) were appalled that the Virginia police stood down when the Nazis attacked the Antifa activists. There was an attempt to burn down Charlottesville’s only Synagogue, and attackers were prevented from starting the attack by locals. One of the very few arrests the police made were of a man of color who was attacked by pipe wielding rightwingers.

This all hit The Guardian this AM. The Guardian’s first few sentences should fuel your outrage:

A rally by right wing group Patriot Prayer in Portland, Oregon culminated in a police charge on counterprotesters on Saturday, as a demonstration once again brought disorder and violence to the city’s downtown area…Two hours into the rally, police moved towards leftwing counterprotesters with batons drawn, and used dozens of “flash bang” stun grenades and rounds containing pepper spray. As they moved on the counterprotest, Patriot Prayer marchers chanted “lock them up, lock them up”.

Several years ago, I wrote about the most overly-quoted statement every made by Martin Luther King, JR. In ‘Letter From a Birmingham Jail’, King called out his fellow pastors for not taking up the cause of Civil rights over niceties such as ‘obeying the law’.

“Never forget that everything Adolf Hitler did in Germany was legal”

But here’s the point I make (and King knew or should have known this). NOT EVERYTHING ADOLF HITLER DID WAS LEGAL.

I hate to quote my own writing, but let me remind everyone of this. It’s important. The police in Portland (and the police in Charlottesville) weren’t caring about legality. They were favoring the Fascist side. And not one American in 100 remembers enough history to know that it was official lassitude (and open collaboration) of the plutocrat class that brought the Nazis to power in Germany. From the article on King’s statement:

Everything Hitler did was NOT LEGAL. In 1923, he tried to overthrow the Weimar government in the infamous ‘Beerhall Putsch’ of Munich. Four police officers and sixteen Nazis were killed in the ensuing gun battles. Hitler was convicted of high treason (a capital offense), but sentenced to a mere five years and released after only one. He served at Landsberg, a relatively comfortable German prison in which to do time, and had enough spare time and lack of supervision there to write his book MEIN KAMPF. Hitler and his movement had extremely powerful friends in the establishment that kept him from being punished severely for his first attempt to overthrow the government.

In short, NOT EVERYTHING HITLER (or his Nazi Party) DID WAS LEGAL. But when he broke the law, powerful people made sure he didn’t pay a price for it. And Police looked the other way when Nazis had street fights with the anti-Fascists of their day.

Which brings us to Trump’s America and the Portland rally .

We KNOW that Law enforcement is infiltrated with people whose sympathies lie with the alt-Right. Several years ago I wrote about the hacker Jeremy Hammond. He got in big trouble for Doxxing (i.e., downloading documents that identified) hundreds of active police officers who were part of right wing groups. I wrote about it here, FFS. I have friends who are in law enforcement or have family members in law enforcement. I can’t imagine that their families or their fellow officers don’t know (or at least suspect) those sympathies. So why does Jeremy Hammond have to go to prison for getting fascists out of law enforcement?

It’s dawning on others as well–we’re at an inflection point vis the acceptance of a Fascist presence in our society. You don’t get rid of fascism by circulating well written Facebook petitions and organizing candlelight vigils. You start with the demand that the DOJ start taking action against the rising tide of fascism, including the right-wing presence in law enforcement. And if you don’t get satisfaction, you need to start thinking seriously about how to stop the empire. When Hitler’s Putsch failed, he encouraged his members that they were simply premature–that Germany had to go through greater hardship in order for the Nazis to sell their platform. Where are we now, ‘Muricans?