Neither of these a**holes needs to worry about eating cat food if the SS checks don’t come.

Bad few days for my personal/family economic outlook. And not just me personally–while all the happy people are crowing about how well the economy has come back, I’ve been hit with one story of personal crisis after another. A friend forced out of his job due to injury; another friend given notice from a place she’s worked for decades that they don’t need her anymore, thanks. Other friends have taken huge steps backwards in pay or job titles just to hang on to employment. All of this is going on when memes like this are circulating. 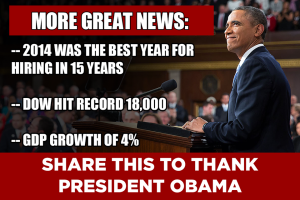 Because after all, we want to make the picture pretty for Hillary in 2016. Right?

Back to the F**kwad Bush brothers above.

There’s not a company I know of that embraces the idea of keeping older workers around. They’re expensive, they require insurance, and they usually know enough that corporate managers are worried about what they will or won’t do. My father was cashiered from his job of 24 years because they wanted to save pension money–this was back in the 1980’s. Companies are more clever about doing this now, but the issue remains. With the exception of some unionized positions (teachers, nurses, civil service), most employees in the graybeard section are vulnerable to the old heave-ho. And things haven’t gotten better. So now we have the Bush plutocrats, aka the Shrub brothers beating the drum for raising retirement age, an idea recently floated through the country’s consciousness in (of all places) the Netflix series House of Cards. House of Cards retained as ‘political consultants’ for developing script ideas a ‘New Democrat’ group called Third Way. And Third Way is pushing for big changes to Social Security. Hence the storyline at the end of last year about Underwood’s pet project AmericaWorks being contingent upon ending the SS program. It’s all lies, of course.

But we wouldn’t be having this discussion if Democrats hadn’t opened the door to entitlement cuts–remember that Obama put SS cuts in the form of ‘Chained CPI on the table in his fight over the government shutdown. Cutting SS doesn’t fix the discretionary budget deficit, which is caused by the Congress passing repeated unbalanced budgets year after year. And speaking of Obamacare–the whole problem with Obamacare is that it forces companies to provide insurance in a healthcare market that’s twice as expensive as it would be under single-payer. Back when the Great Recession first hit, there were proposals to start Medicare coverage at age 55 in order to make older workers cheaper to cover. That went nowhere, of course. But if both parties are edging toward the position that workers need to work more years and ‘tough choices have to be made on Social Security and Medicare, people need to watch everybody.

And we shouldn’t be having a discussion about raising retirement age when workers older than, say, 50 can’t get work regardless of qualifications. Say you’re a forcibly retired individual, thrown under the bus before age 60. What exactly are you going to do for employment for the next few years until SS kicks in? Plenty of people are in that boat. And remember–employed older workers tend to have more disposable income (at least until they’ve gotten the old heave-ho). Who will be able to spend in order to keep retail trade and manufacturing going? Retail is already looking at a huge employment step-down this year. That said, does anyone reading this trust Hillary Clinton to not try to counter the GOP by also offering to make ‘hard choices’ about Social Security? Remember that her husband pushed through the Boskin Commission Reforms that significantly reduced COLA for seniors.

Two years ago, I wrote about a 77 year old man named Tom Palone who wasn’t able to retire even after a long history of executive work–bad luck and circumstances out of his control have him working as a bartender and at a Sam’s Club. Palone is lucky enough to be in sufficient physical shape to do manual labor. Not all 77 year olds–indeed, not that many 60 somethings–are so lucky. People shouldn’t trust either party on keeping people in jobs.

← How to fight the empire by getting media attention
Thanks Dr. Evil! Fossil Fuel Propaganda Misfire Goes Viral →