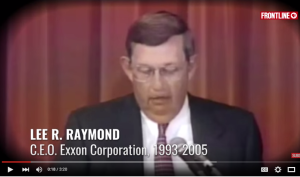 Last week I told you a wonderful story of Exxon and Shell and Global Warming. Specifically, I relayed the information now made available about how back in the late 1970’s, Exxon’s research scientists confirmed a link between the burning of fossil fuels and climate warming (and kept the news to themselves). Shell Oil’s disingenuous ways involve what it tells the world about climate change (nothing to see here) and what it talks about for internal planning purposes (4-6c increase in global temperatures in the near term. It’s all here if you need it. If you’ve tired of arguing with your global warming-denying cousin Joey over the data, this should be the nail in the coffin for him. It won’t be, of course–just a few days ago, The Donald came forward and declared himself a denialist (not that we should be surprised).

But anyone expecting better news about the behavior about the 1% plutocrat class needs to find it elsewhere. There’s news that Volkswagen has been gaming the actual emissions on its cars–the internal computer that controls the engine power has a ‘test mode’ that puts out considerably less in the way of emissions than what the car might put out while rolling along the US version of the Autobahn. That’s helping to wreck the environment. And as pointed out here, the disclosure also helps nuke the idea that there’s any such thing as an auto company interested in the environment. Hey, GM doesn’t even care overmuch when its customers DIE due to manufacturing problems on the ignition switch–why should we expect them to care about the environment?

And then there’s this Avatar of basic human decency.

A tweet from the current avatar of hostage capitalism, Martin Shkreli

Martin Shkreli is a hedge fund guy with a checkered background. But his background was not checkered enough to keep him from buying the rights to critical pharmaceuticals. He bought out production rights to daraprim, a drug that is in many cases the only treatment available to ward off toxoplasmosis and other opportunistic infections in people with immune systems compromised by HIV or immuno-suppressive drugs used for cancer patients and transplant survivors. After his purchase of daraprim, he then got a bit more aggressive about his monopoly–the price of the drug went from $13.50 per tablet to $750. And even though he has (apparently) rolled the price back on the drug, his actions stand as a pointed reminder of the problem (most prevalent in this country) of treating medicine as just another perfect place for a thriving free market. Instead, he’s reminded us all (as if we needed reminding) that medical treatment is the most horrid example of hostage capitalism.

This all may lead a casual reader to ask what all this has to do with capitalism per se. We’ve always had greedy people, and people have been ripping each other off since we’ve had people. Certainly the problem with pharma ripoffs is not new–Bernie Sanders’ acolytes have been pointing at his previous work in the Senate to rein in price gouging on critical drugs. But there may be other things at work. Have we reached the death-stage of capitalism? The indicators are pointing that way. As my climate-collapse friends are reminding me, capitalism depends on infinite economic growth, and we live on a finite planet. But long before we were ever talking about human extinction as being in the cards, Karl Marx himself wrote that Capitalism would reach a logical end. Economist Nouriel Roubini (hardly a Marxist) reflected on this in a recent interview:

Karl Marx had it right.  At some point, Capitalism can destroy itself.  You cannot keep on shifting income from labor to Capital without having an excess capacity and a lack of aggregate demand.  That’s what has happened.  We thought that markets worked.  They’re not working.  The individual can be rational.  The firm, to survive and thrive, can push labor costs more and more down, but labor costs are someone else’s income and consumption.  That’s why it’s a self-destructive process.

The prior generations of plutocrats at least understood that the house of cards that is capitalism cannot work without a working class with enough discretionary income to purchase the products the plutocrats are putting out. But over the past 40 years, there has been a huge shift of money from the purchasing class to the ruling class. In the US, falling wages were covered over by two-income households and home equity loans. But that game is over (in the US at least) now that adult participation in the workforce has fallen to its lowest level since the 1970’s.

Slamming on the brakes for the oil/fossil fuel business (in order to avoid extinction level warming) is perhaps the death knell of capitalism and industrial civilization. In the meantime, as we circle the drain, we are perhaps seeing the corruption inherent in the status quo. All of the schemes to separate the 99% from their wealth are coming unwound, and the blowback will be ugly.

It calls to mind a cartoon I’ve been seeing in my climate collapse group. A group of bedgraggled humans are huddled around a campfire in a cave. And one business-suited gentleman is saying that “of course what we did ultimately destroyed human civilization and cause the end of life on this planet–but for awhile we returned excellent shareholder value”