Stop a pipeline, prevent a meltdown

I don’t usually ask readers to sign on to be troublemakers, but something seriously stupid and dangerous is about to be built and stopping it is necessary if people want to live around this part of NY. The Spectra folks, who put that amazingly dangerous 30″ natural gas pipeline under the Whitney museum, are building another pipeline called the Algonquin Incremental Market (AIM) pipeline. This would put a large capacity natural gas pipeline along a path from Nova Scotia down to metro NY. And that proposed path puts that pipeline under or along more than a few fault lines, railroad right-of-ways for propane tankers, and several heavily populated suburban areas. But (for me) the cherry on top of this merde sundae is that the pipeline will go through the Indian Point Nuclear Power Plant’s land. Indian Point, like all the 104 other US nuclear plants, is stuffed to the gills with spent fuel pools for all the fuel rods sitting on its property. That’s not a situation that gets fixed anytime soon, since (according to industry consultant Jeremy Rifkin) there is no safe place to store spent nuclear fuel.  If Indian Point is typical of the 104 power plants in the US, its spent fuel pools contain more curies of radiation than the US has released in all its nuclear weapons tests up to the 1990’s. 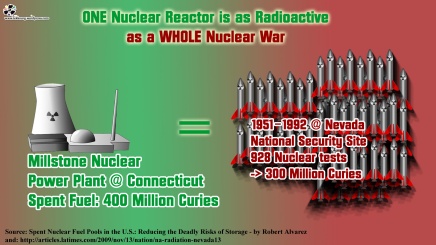 Helpful graphic to let you know just how screwed we are if something were to cause problems in cooling spent fuel pools at Indian Point.

But why is Entergy, the owner of Indian Point and a number of other aging decrepit US nuke plants, letting this go forward? Entergy says no problem! It’s at this point that I want to remind readers that Entergy is the hapless company whose lack of attention to detail let the lights go out on the Superbowl a couple years ago.  Anyway, we have a giant NG pipeline being put through a nuclear power site run by a company that can’t even set up an evacuation plan that could get some of the 20 million people who’d be in harm’s way out of the danger zone. And remember, the NRC considers the Indian Point power plant 3 the plant most at risk for seismic activity.

Apparently, the trees on the pipeline right of way are supposed to start coming down in early October. There’s a Pledge of Resistance being circulated. There are workshops being done on how to protest, what to do organizationally, et cetera. I know you have a lot on your plate. But just one pipeline accident can spoil your whole day. 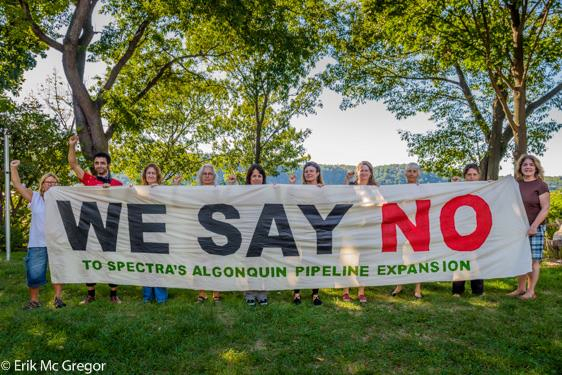 (thanks to Erik McGregor for use of the above image)