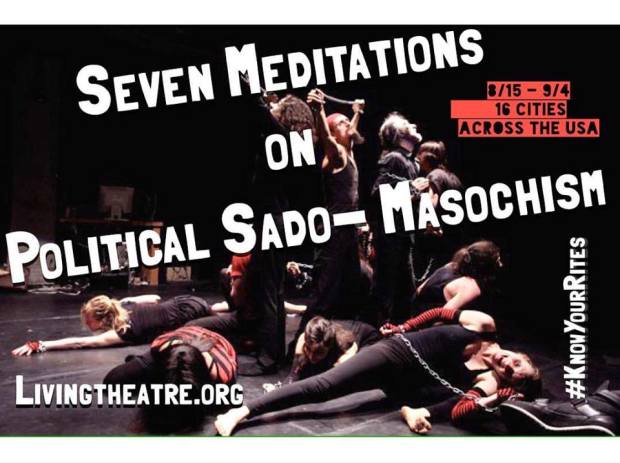 Know Your Rites, a touring show from the Living Theatre on capitalism and slavery. Wanna support them? go here.

Some friends associated with the venerable Living Theatre of 1960’s fame are currently touring a show on capitalism as a form of sado-masochism. I got to see Know Your Rites at a dress rehearsal. Not an easy thing to watch, but I’ve been thinking about it a great deal (and you should go see it if you can).

I had written a few months ago about end-stage capitalism after seeing a column from my friend Kevin Hester. You can go back to the original articles here. The focus from the folks in the enviro- and NTHE (near term human extinction) movements is that the wrecking of the human habitat is enough to bring down capitalism. Simply put (and using James Howard Kuntsler‘s favorite MacGuffin), the world cannot continue to produce plastic crap like salad shooters and fake food like Cheet-ohs in a world where energy and raw materials are increasingly expensive. And profit margins have been eaten up by the recent entries into capitalism–countries like India and China, which enjoy (if that’s the right term) slave wage levels for manufacturing and monopoly driven pricing for raw materials. The only business that is going well is the casino-trade of investment banking, where the money is churned out of notions and insider knowledge. Such ‘industry’ is a zero-sum game. There is no net wealth being created by the bankers–their incentives to turn pennies into dimes builds no roads, plants no trees, creates no products except profit.

With costs going up and consumer demand flat or in decline, the world of finance and stock transaction is the only entity that can prosper. But finance is a zero-sum game. If Barclays turns pennies into dimes, it’s because somebody else saw their dimes transformed into pennies. Nobody else in what passes for business these days can achieve the hurdle rates called for by the banks. All the tricks of capitalism used to juice the profit margin–regulatory relief, destruction of labor bargaining power, the trumping of national sovereignty through treaties like GATT, etc–have been played out. And as long as the hurdle rates stay in place, new businesses (or old businesses) based on actual merchandise can’t function. The idea that there will be no new ‘billion dollar’ brands is part of that calculation. Under the scenario laid out by Kevin Hester in the article linked above,, capitalism will collapse under the inability to regenerate.

So what does Louisiana have to do with anything?

We are eleven years away from the Hurricane Katrina disaster, which laid waste to big sections of Louisiana and much of Mississippi and even parts of Florida. And we just had a storm that did more damage and it didn’t even get to hurricane level. Per the Washington Post, the un-named storm that just walloped Baton Rouge dumped triple the rain on the state that Katrina did. This follows the Ellicott, Maryland storm that I blogged about last month. We are seeing thousand year storms, with huge volumes of rain unleashed in a matter of minutes.

So here are the questions:

My friends who are sharing Julian Beck and Judith Malina’s vision for the world are right that capitalism as we know it needs to go away. But revolution may not be necessary. We just need to destroy the planet to the point where the market no longer functions.

In the meantime, spare a thought or two for the poor people of Louisiana, who seem to be on the bleeding edge of climate Collapse.

← The Jobs Lie–Trump calls it
GOOD MORNING! (bite me) →