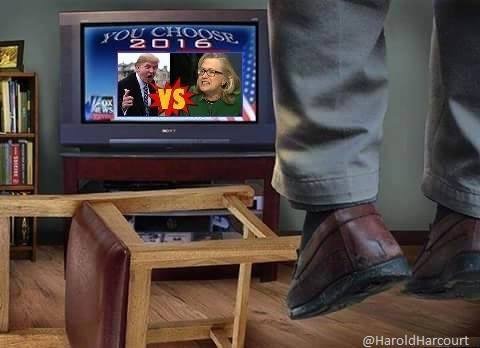 and we come full circle.

I get lots of article feeds from multiple perspectives. This is due to my early support of Bernie Sanders. Many of those who were working in that cause are now putting up articles about Clinton that are sometimes fomented by right-wing sources (Breitbart and Daily Caller come to mind). I also get plenty of anti-Trump articles from my Librul friends. Some are useless, but some are worth reading. In case you’re wondering, I’m probably pulling the lever for Jill Stein. I’m in a state (NY) where the GOP would have to have a historic night to flip for Trump. I’m encouraging people in reliably blue states to do the same, by the way–California flipping to Trump is virtually impossible. Remember that under our hopelessly archaic ELECTORAL COLLEGE system, the majority vote can still go to the loser–Gore WON the popular vote but lost in the electoral college thanks to the GOP chicanery in Florida. My vote for Jill Stein is about making sure the Greens have enough votes (5% of total) to be a permanent part of the ballot. But I digress.

In short, the two party duopoly has served up two really damaged people to run for the highest office in the land. I have been trying to think of a scenario where any of our NATO allies would have their major parties offer up this electoral merde. I have to think it wouldn’t happen because people would riot in the streets.