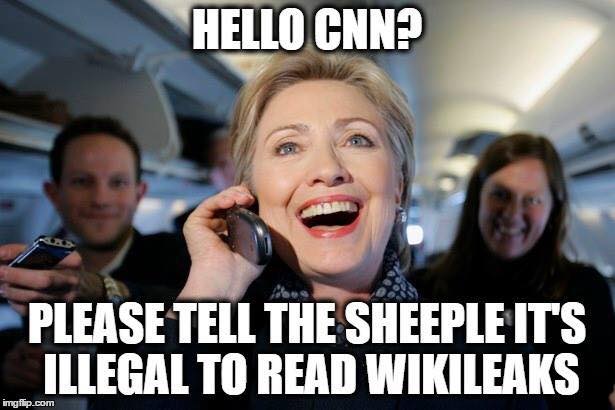 Sad because CNN has been telling people it’s illegal to read Wikileaks. No on-air connection. Maybe they WILL make it illegal once they’re in charge. Download the Tor browser now.

There’s a year’s worth of blog material in the news over the  past five days (and no, I’m not talking about my birthday). I wouldn’t ever have to do anything artsy fartsy here again (memo to self–why is spellcheck okay with ‘artsy’, not with ‘fartsy’?). I hear there was an election that didn’t go the way many of my friends thought it would. Well, DUH! I was surely not the only amateur pundit calling the election for Trump. In June, the polls were showing that Bernie would romp against Trump, but Clinton would barely squeak by. And yet somehow, the DNC gamed the primary so that Hillary won. I alienated a lot of people when I started saying in June that Trump was going to win against Clinton. Don’t get me wrong–I think Trump will be the most repugnant individual we’ve had in the WH (and I lived through RICHARD NIXON so I know what counts as repugnant).

But protesting Trump? He was running for president and he won. As one of my 1,000+ close personal friends who attended the March to Restore Democracy put it in a FB post just now, why are people protesting Trump? Call it arrogance, call it Hubris, call it myopia, but own up to a really inconvenient truth: the DNC (NOT the primary voters) picked the candidate most likely to blow it. And she blew it. And the collective shock is because the better part of MSM were in the tank for her. This is no idle conspiracy theory–thanks to Wikileaks, we know that Debbie Wasserman Schultz and other Clinton operatives were bullying people at MSNBC and the New York Times to give them positive coverage.

For two nights, angry NYers have been marching on Trump’s home. Why aren’t they marching on the State Democratic Committee headquarters? It was New York State Dems that refused to treat seriously the obvious gaming of the Primary (which I wrote about here). Ditto the states of Ohio and Arizona and California. Coming out of nowhere without any corporate money, Sanders beat Clinton to a standstill. And Sanders treated Clinton with kid gloves. He did her no favors when he ruled out asking questions about her e-mail server. We got Trump because Clinton vastly underestimated the anger that’s out here because of an economy that’s in a structural depression. Trump reached out to those voters.

One more thing for Clinton that is advice from my amazing play HOW TO STOP THE EMPIRE WHILE KEEPING YOUR DAY JOB. It’s rule six. The play is online, so you can listen to me say it, or you can just read this sage advice, first given in 2011 when the idea of Trump running for president was ridiculous:

Step six: stop making fun of poor people. Don’t say things to powerless people that you wouldn’t say to Donald Trump. Have you noticed lately how much TV is devoted to looking down on poor people? Isn’t that the whole Reality TV industry? After all, thirty years ago the ‘stars’ of JERSEY SHORE could get a job with decent pay and bennies at the Ford Plant in Mahwah—they wouldn’t have to be parading their bad choices in front of us for our amusement. And Poor people R us—while things have been crappy for middle class people for the past decade, the poor have been taking it on the chin since Reagan’s inauguration. We’re building a movement, and we need every ally we can find. Look around you the next time you’re in a subway car and remember this: you have more in common with anyone in that train car than you will ever have with Warren Buffet or Mike Bloomberg. Every time a leftist makes fun of a poor person, both Koch brothers pop a big woody.

I was called out in DC for saying that Lefties make fun of poor people. 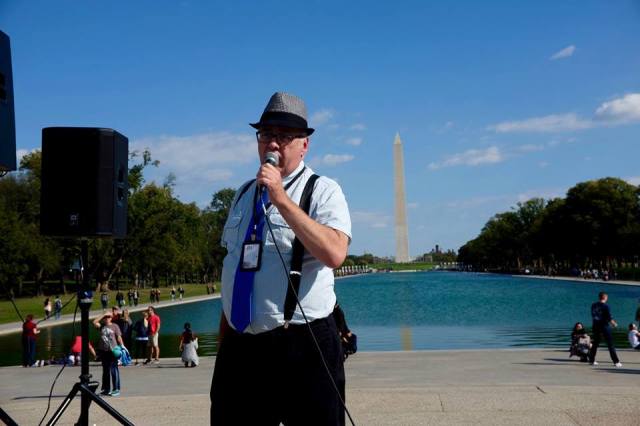 me in DC NOT making fun of poor people. picture courtesy Melanie Oringer

But insulting and denigrating the folks who pull the lever for Trump is… well, in many cases, it’s making fun of poor people. If you assume that poor people would be better off under Clinton than Trump, and you make this known by calling Trump supporters ‘deplorables’, you aren’t going to move them to your point of view. Memo to Bill Maher and other Hillary-friendly libs who made fun of the people backing Trump: You helped put him in office. This is on YOU–not disgruntled Bernie supporters, not Greens (Clinton and friends worked really hard to destroy Stein’s campaign), not people who wanted something other than an already-rejected candidate trying to reboot the 2008 Primary.

And I could be wrong.

← Waiting for next Wednesday
While we were distracted…(updated) →