Chelsea Manning to walk free in May 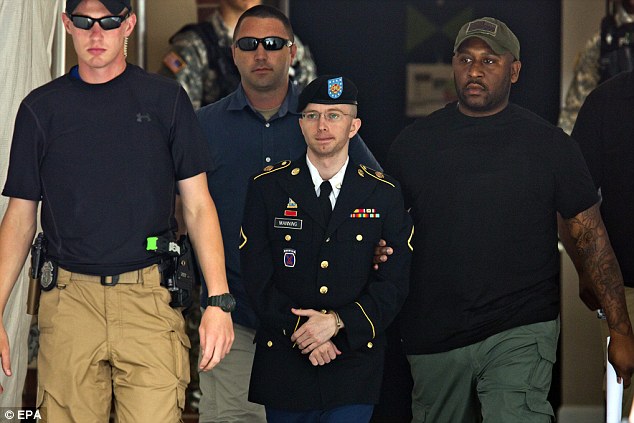 Chelsea Manning goes into custody after being found guilty of violating the Espionage Act in July 2013. This picture breaks my heart for how vulnerable she looks next to the security personnel.

Chelsea Manning, the US Army private who blew the whistle on ‘collateral murders’ and other secrets the government would rather not address, has received a sentence commutation from President Obama and will go free in May. Prison was clearly killing her–she had attempted suicide, and it was clear that she would never survive the long sentence she was handed (original release date would’ve been in 2045).

I’m wondering what the trade-off was—there were rumors over the weekend that Julian Assange had agreed to surrender to authorities if Obama freed Manning. I had blogged about this a couple years ago, and according to insiders, the DOJ has already drawn up the indictment for Assange when Manning pleaded guilty in 2013. Also, during the run-up to the election, there were rumors that Assange had been grabbed up from the Ecuadoran embassy and put on a plane heading to Sweden and then NY. Assange had his internet access shut off for awhile, and observers at the embassy had noticed odd behavior among embassy security. And in the middle of all this, Wikileaks dropped one of its ‘insurance’ files. No one in msm ever put staff on the revelations. Amazingly enough, CNN told its viewers that it was illegal for Americans to read the files, and that was that.

Sad because CNN has been telling people it’s illegal to read Wikileaks. No on-air connection. Maybe they WILL make it illegal once they’re in charge. Download the Tor browser now.

By my count, we have about 72 more hours of an Obama presidency. I doubt we’ll see any more high-profile pardons or commutations of whistleblowers or people convicted of crimes through rigging of the judicial system (though some are still holding out hope for Mumia Abu Jamal and Leonard Peltier). Ed Snowden has already given up the hope he had for a pardon, though his ‘crimes’ are of the same sort as Manning’s. There’s no way to tell what Assange promised in return for Manning’s sentence commutation. But if we don’t see anymore Wikileaks revelations between now and May, I think it’s safe to assume that Assange has made a deal for Manning’s freedom.

One other point: we know that Manning had tried to notify the chain of command about the crimes he’d uncovered and was rebuffed. And when he took his information to those crusaders against ‘fake news’ the Washington Post and the New York Times, he was blown off–nobody in those vaunted institutions wanted to talk to him about what he knew. I would argue that had a ‘conventional’ media outlet gone with his revelations, he wouldn’t have been in the docks in the first place–that a revelation from the Washington Post or NY Times would have protected him from the punitive actions and draconian sentence handed out in his case. The mainstream campaign against ‘fake news’ is increasingly about protecting the ‘fake journalism’ that characterizes much of our news coverage.