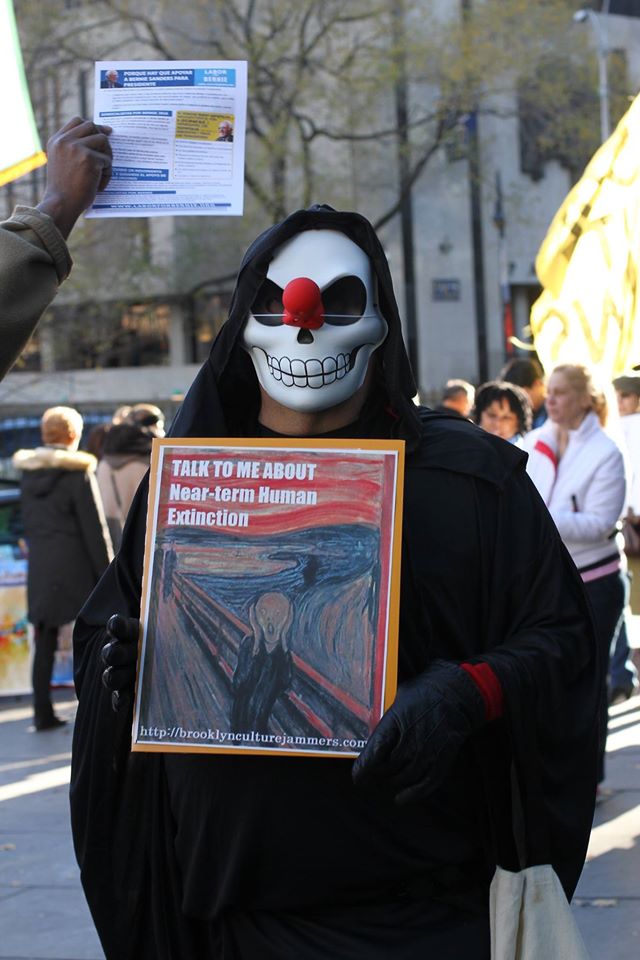 Here’s what I was scaring people with on Sunday a couple years back.

I’ve been slacking again. I haven’t updated my website as I said I would, and I’ve been rehashing other people’s work (thanks Kevin Hester). I bring the usual bad news, and the only comfort in it is that I’m no longer surprised.

Apparently, we (by ‘we’ I mean the federal government we fund with our taxes) knew extinction was coming over a decade ago. In February 2004, a number of world political leaders (including George W Bush, who heard first) were being informed by the US Pentagon that the planet would go to hell by 2020. From a February 2004 article in the Guardian, we’re told that the Pentagon had created a secret internal document warning of climate-related disaster commencing in 2020. The document predicts that abrupt climate change could bring the planet to the edge of anarchy as countries develop a nuclear threat to defend and secure dwindling food, water and energy supplies. The threat to global stability vastly eclipses that of terrorism, say the few experts privy to its contents.

By the way, 2002 was the year GOP strategist Frank Luntz advised GOP candidates that the issue of Global Warming and human causation was a real threat to the GOP holding onto government. He advised all GOPers to use the phrase ‘climate change’, which carried far less blame with focus groups. ‘Climate Change’ sounds benign, and it helped feed deniers’ favorite bromide. “Of course the climate is changing. It ALWAYS changes”. I wrote about it here. I’m sure there’s no connection between the leaking of the report and Luntz’ advice, and that nobody in the GOP had access to the report, which would have been political dynamite sufficient to possibly derail the Bush re-election.

‘Disruption and conflict will be endemic features of life,’ concludes the Pentagon analysis. ‘Once again, warfare would define human life.’.

Other news is that last January 2018, a Harvard Scientist named James Anderson was awarded the Benton Medal for Distinguished Public Service, in part, for his groundbreaking research that led to the Montreal Protocol in 1987 to mitigate damage to the Ozone Layer. He used the ceremony to give a speech about the climate. He didn’t mince words (Italics from the Counterpunch article by Robert Hunziker. Full article here).

I’m sure Anderson’s hosts were expecting some hopium bromides (‘climate change bad, blah-blah, going to have to fix by 2100 or bad things, blah blah’) that would put everyone at ease. That wasn’t in the good Doctor’s plans, however. The article continues:

In his acceptance speech, James G. Anderson, Harvard professor of atmospheric chemistry, now warns that it is foolhardy to assume we can recover from the global warming leviathan simply by cutting back emissions.

Accordingly, the only way humanity can dig itself out of the climate change/global-warming hole is by way of a WWII type effort with total transformation of industry off carbon and removal of carbon from the atmosphere within five years. The situation is so dire that it requires a worldwide Marshall Plan effort, plus kneeling in prayer.

Additionally, Anderson says the chance of permanent ice remaining in the Arctic after 2022 is zero. Already, 80% is gone. The problem: Without an ice shield to protect frozen methane hydrates in place for millennia, the Arctic turns into a methane nightmare. This is comparable to poking the global warming monster with a stick, as runaway global warming (“RGW”) emerges from the depths. Interestingly enough, the Arctic Methane Emergency Group/UK, composed of distinguished scientists, seems to be in agreement with this assessment.

By the way, the gist of the COUNTERPUNCH article also made Forbes, the great ‘capitalist tool’ and longtime home of climate change deniers. Taking action on Dr. Anderson’s recommendations would require the world economy taking its collective foot off the gas, so the editors there buried the lede and brought up an estimate about the last time we had this much carbon in the atmosphere (12 million years ago per their headline). The real question, which they didn’t want their readership to ponder, is when the extinction clock runs out. Blah, blah.

Oh, in other news (and confirmation that Nature Bats Last), many species of rabbits and other mammals making their homes in northern climes like Canada are no longer growing white winter coats. This is indicative of the fact that winter snows are no longer staying around long enough to make the coats a natural advantage.

If you’re feeling depressed, you might want to paste a ‘nature bats last’ sticker on your nearest offending symbol of fossil fuels. Be careful out there! No vandalism, Please!