Tried to warn you, Tampa 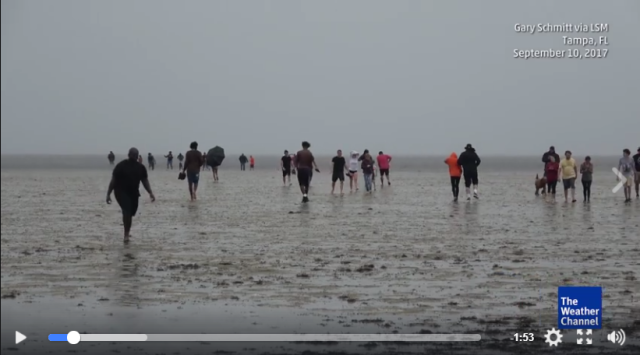 The week of superstorms, culminating in the weekend of anxiety. First there was Hurricane Harvey, bearing down on Houston, Texas like God Almighty was in a smiting mood. Then there was Hurricane Irma, clobbering Cuba and the Virgin Islands and then heading up Florida like a titanoboa ready to wrap around Florida’s peninsula and crush the life out of it. I have family in Miami (so far reporting in as Safe). But I have friends  in Tampa as well–I lived in Tampa while I went to school at the University of South Florida (USF). I knew people who lived next to Tampa Bay.  The above Weather Channel film isn’t some abstract piece of video to me. The people who are there now are walking out onto land that probably hasn’t seen sunlight in millennia. It has been scraped dry by the massive vacuum superstorm that is Irma.

And now we’re getting the ‘check-ins’ from Tampa and Miami friends. Some of our Tampa friends are reporting that electricity and internet are still spotty, but nobody I know has reported dire consequences. While the sight of Tampa Bay disappearing is unnerving to say the least, it isn’t a stack of dead bodies.

But here’s the thing:

I tried to warn them.

You may recall that early this year, I was excited and pleased to be taking Planet Hospice, my play about global warming and the threat of human extinction, to the Tampa Fringe Fest last May. I’d already taken it to Ithaca, NY as part of their Fringe Festival, and I got good feedback. I could have done a bunch of other things with the money it would take me to fly down to Tampa and produce a play there. But I wanted to do it in Tampa. Why? I explained it here:

“I went to college at the University Of South Florida in Tampa  and spent some six years in the Tampa Bay area. It was a formative part of my life. So there’s a personal connection there. But there’s a political reason to bring my play to Florida. Florida has Rick Scott as its Governor, one of the Republican governors whose denial about Climate Change is so pervasive he won’t let the phrase be used by state employees or in public documents. Florida is highly vulnerable to global warming because of its low-lying land–someone pointed out that Miami is a King tide/ tropical storm combo away from washing out to sea. Miami doesn’t have a fringe fest, but Tampa does. Maybe there should be a serious discussion of runaway climate change in Florida”.

And in the two months before showing up to Urban Phoenix (now shuttered, I hear), I wrote to every media outlet and every climate nonprofit within driving distance of Tampa and told them “This is about you. This is your issue. You want to do outreach? I need audience, but you need voters. Global warming is going to kick your cojones.”

And I heard back from…

And it wasn’t just the non-profits. It was community radio. It was the university folks (people I thought would be interested in an alumnus touring a play from NYC to Tampa). It was local college professors who study climate and conservation biology. The possibility of global warming leading to extinction hadn’t been given the Media Seal of Approval yet. I got the treatment the Sandy Hook mass murder ‘false flag’ kooks get.

I guess everybody in the climate activist biz hoped the bad climate things would happen ‘someday’. As in ‘not while I’m alive to care’.

I‘d expect that I would have gotten slightly better treatment if I’d premiered the Fringe Show a few weeks after NY Mag ran its famous ‘we’re going extinct, folks’ article last July. Maybe I’m delusional, but you never know. And this isn’t about me, really. I do the work I do because I want to have dialogue. You may not agree with my point of view in any of the one-person shows I’ve toured, but I really don’t write plays that don’t have a point of view. See? But Florida always felt really vulnerable to me–the thing about the state is that nature is really pervasive and can handle a lot of mistreatment in a place as fecund as the Sunshine State before it snaps back at you.

And (I hope) now we’re about to have a national conversation (long overdue) about what global warming means. And one thing it probably means to Houstonians and Floridians is that century storms are going to be THE NORM. Cat 4 and Cat 5 storms have all the conditions they need to flourish–bathtub-warm Gulf and Atlantic waters, lots of water vapor in the warmer atmosphere, and jet-streams rearranged by global warming. And as a country, we need to decide what we do to respond. The storm in Texas is estimated to cost $180 BILLION by Fortune Magazine, and something like 70% of the home owners lack coverage for flood damage.  Nobody has come forward with a figure for Florida yet (because Irma is still spinning away) but it’s not absurd to say it’s inflicted at least as much damage as what happened to Texas ALREADY. And (larger issue), what if this one-two punch is enough to sink the insurance industry? Is Texas going to rebuild all those oil refineries (and keep all those jobs) if the underwriters decide that this is a risk too dear? Here in NYC, we’re about to spend a couple billion in construction (never mind lost wages and real estate costs) to repair the L subway line, savaged by Hurricane Superstorm Sandy five years ago. Is there enough money in the US treasury to pay for all this? Is there enough money in ALL US ECONOMIC activity to pay for this?

Again, Sorry, Tampa. I tried to warn you. 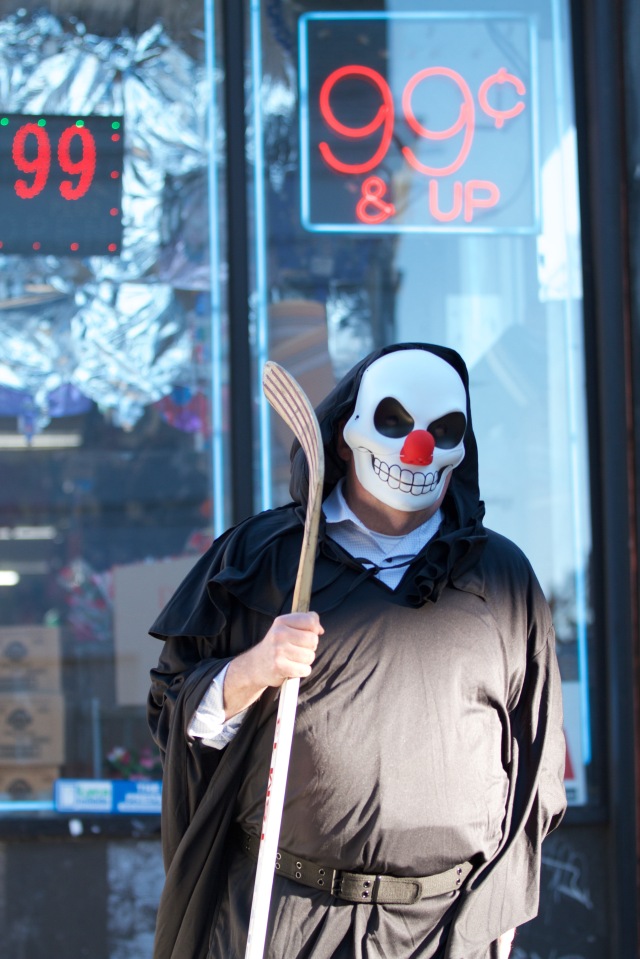 In this production still from my play PLANET HOSPICE, I’m walking around Bushwick trying to explain why the average temperature will go up by an extinction-level 4 C as early as 2020.