Fake news and confessions of a sucker

December 28, 2017 · by Brooklyn Culture Jammers · in Protests, The Trump era · Leave a comment

Last week, I wrote (based on numerous overlapping news reports) that Trump was set to fire Mueller on December 22. The event of 12/22 was the signing of the Tax ‘reform’ bill. Trump’s press secretary Sarah Huckabee Sanders, has said and continues to say, there are no plans afoot to fire Mueller. I felt played, frankly. And I’m feeling increasingly played by a media that smells blood in the air and doesn’t let facts get in the way of a good story.

I should point out to those already prepared to pillory me that I am not now nor have I ever been a supporter of Donald Trump. If you put ‘trump’ in the search box, you’ll pop up a dozen or so articles about the 2016 presidential race, and I think I’ve made it clear that I never supported his run for presidency. But I also pointed out that there were times Trump said something that was in the neighborhood of honest and the MSM ignored him or laughed at his assertions. Remember when Trump was saying that he feared the gaming of the election and the talking heads all laughed at him? Really? So 2000 and 2004 didn’t happen? And there were no discrepancies in the 2016 primaries?

Anyway, back to the present. Over the past few weeks, a number of other ‘breaking stories’ on Trump perfidy have hit the front pages. And I’ve reposted them on Facebook because they were from ‘reliable’ sources. And several have been in fact, fake news. Two weeks ago, CNN breathlessly broke a story that Wikileaks offered anti-Clinton documents to Trump on September 4 2016, before they were published. MSNBC and CBS News both went with the story and pundits played up the story as a way to indict Trump for inside knowledge (possibly provided by Russia). But it turned out the email for the offer was September 14, not September 4–a full day after Wikileaks had put the documents online. In short, Trump’s campaign had no sources inside Wikileaks and no special access to damaging e-mails from the Clinton campaign.The fallout was minimal. And unlike the case of the Washington Post takedown of Veritas for James O’Keefe’s attempt to plant a fake story on Senate Candidate Roy Moore’s sexual harassment issue, the fake leakers were not identified.

Journalist Glenn Greenwald was justifiably angry about this, and wrote about the issues in his publication The Intercept. He has written about the ‘fake news’ aspects of the Russian scandal for several months now, and this story stuck in his craw. The story of Wikileaks collusion with the Russians was major news if true, but it was a lie. And in running with the story, CBS claimed there were three sources for its reporting. Why, asks Greenwald, were the sources not identified? If you’ve burned a major news operation on a story like this, SOP is for the news organization to turn on you and identify your dishonesty as a way of inoculating other news organizations so that they don’t fall for your stories. That didn’t happen here, which begs the question: How senior were the three individuals who confirmed the Wikileaks story? Why weren’t they identified?

And in a recent interview, Greenwald also called out more ‘fake news’ on Trump. It was widely reported a few weeks ago that Trump’s personal bank records were obtained from Deutschebank by Mueller. If true, that was proof that Mueller had the goods on Trump’s collusion with the Russians. But it wasn’t true, and the people who reported it were not pilloried for it. The details for all of these stories were reported on NPR’s excellent ON THE MEDIA, and you can listen to the discussion here. Of particular interest is Greenwald’s theory that ‘cable news’ organizations such as Fox and MSNBC are parsing their reportage to please their market share. Nobody on MSNBC is doing much to examine the narrative of the Russian collusion story, and people like Greenwald and Seymour Hersh are not getting invitations to news organizations that have bought the Russian collusion story.

The ‘Russian collusion’ story is now filling another unfortunate (but true story): Green Party presidential Candidate Jill Stein is now being hit with  accusations of collusion with the Russians to influence the 2016 election. Fair warning: I’ve been supporting the Green party off and on for the last 25 year, and I voted for Stein in 2016 AND 2012. The DNC put an exceptional amount of effort behind trashing Jill Stein in 2016, and they got liberal-friendly media figures like Bill Maher and John Oliver to join in (the DNC put more visible effort into trashing the Greens than they did in sending Clinton back to the Rust Belt where she lost four formerly-reliable Dem states to Trump). While RT (a Russian news agency now being forced to register as ‘foreign agents’) has covered this, other news agencies have not. Stein got less than 2% of the US vote in 2016, and most of that was in blue states where she had no impact on the election. And now there are pictures of a dinner in Moscow where Stein was one of several people at a dinner table with both Putin and Michael Flynn, a man who has already pleaded guilty to lying to the FBI and is expected to become a key witness in whatever trials result from Mueller’s investigation.

Memo to Russian Conspiracy theorists. The Green party is not a US phenomenon. It is an international movement, with Green Parties in most western democracies (there’s even a small Russian Green Party). There’s no single ‘head’ of the Green Party, but Jill Stein is probably the most recognizable person in the movement, and back in the 1980’s, the Soviets got burned when they misunderstood the party’s goals. The Greens were if anything more anti-Soviet than most western governments at the time. In the 1990’s, I was commissioned to write a biography of Petra Kelly, the woman who co-founded the German Green Party and had a major (though undocumented) effect on the fall of the Berlin Wall and the dissolution of the Warsaw Pact. In the 1980’s, Gorbachev thought the Greens were fellow travelers and presented Kelly with a major award. She used her speech to castigate the Soviets for the war in Afghanistan. Putin’s invitation to a leader of the Green party was not unprecedented. But much of the DNC has spent the last 16 years blaming Ralph Nader and the Green Party for the election fiasco in Florida in 2000, when it was the Supreme Court that was allowed to decide the election after the Florida Republican Party disenfranchised some 97,000 Democratic voters.

It does not surprise me that the Democrats are busy looking for somebody to blame for the 2016 loss, but why not get on the GOP for disenfranchising some 7 MILLION VOTERS in Republican-held states? And as for Trump and the issue of Russian collusion, the ‘fake news’ is coming from mainstream media running anti-Trump stories. If we do come to the point where Trump is removed from office, his supporters will have some backing to state that it was due to ‘Fake News’. And as for mainstream ‘news’ organizations, people in charge of those organizations need to stop with the fake news. There are ample reasons to dislike Trump and his policies. 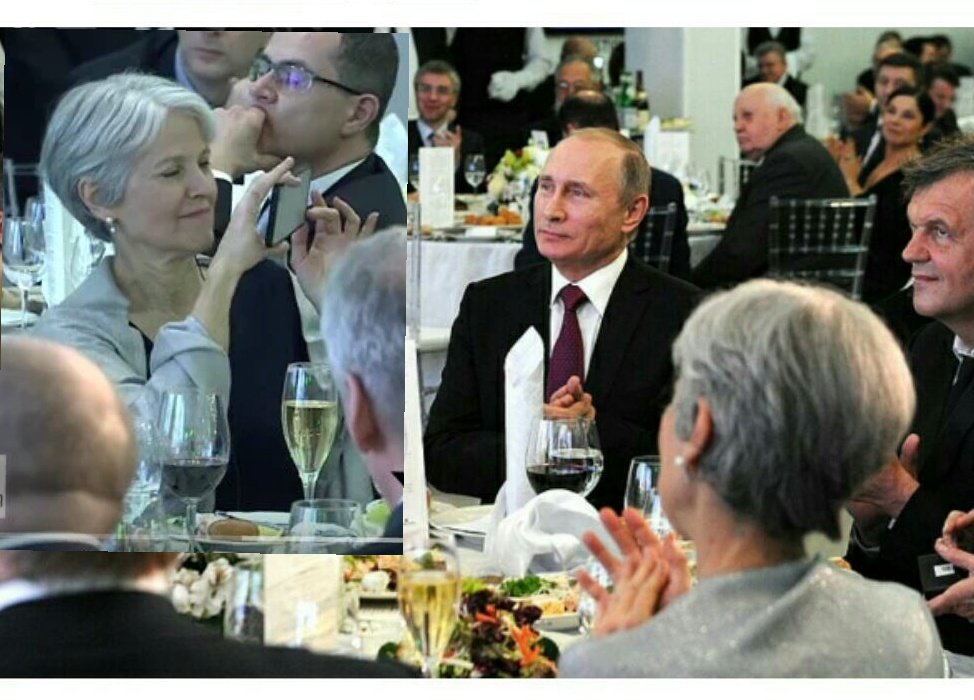 one of the pictures from the meeting of Stein and Putin. Proof of collusion?

Meanwhile, as I reported earlier, Fox is running regular stories on Mueller planning a coup of Trump and the Republicans. Jeanine Pirro of Fox is demanding that FBI agents be not just fired but indicted for tweeting negative things about Donald Trump. One of the ideas that both Keith Olbermann and Robert Reich have been circulating over the past year is that we’re going in the direction of not just polarization but outright war. If Trump supporters are justified in saying that the MSM is pushing fake news, how difficult will it be for civil governance if Trump is impeached or indicted?